U.S. still says Cuba is a sponsor of terrorism 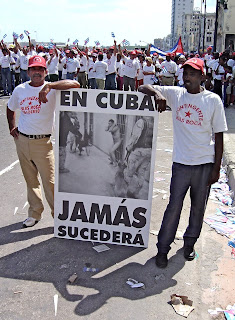 Havana street protest, 2003
State Department officials today said they still consider Cuba a state sponsor of terrorism, but their assessment isn't as harsh now as it was during the Bush administration.
From the State Department's Country Reports on Terrorism for 2008:

Although Cuba no longer actively supports armed struggle in Latin America and other parts of the world, the Cuban government continued to provide safe haven to several terrorists.

Members of ETA, the FARC, and the ELN remained in Cuba during 2008, some having arrived in Cuba in connection with peace negotiations with the governments of Spain and Colombia. Cuban authorities continued to publicly defend the FARC. However, on July 6, 2008, former Cuban President Fidel Castro called on the FARC to release the hostages they were holding without preconditions. He has also condemned the FARC's mistreatment of captives and of their abduction of civilian politicians who had no role in the armed conflict.

The United States has no evidence of terrorist-related money laundering or terrorist financing activities in Cuba, although Cuba has one of the world’s most secretive and non-transparent national banking systems. Cuba has no financial intelligence unit. Cuba’s Law 93 Against Acts of Terrorism provides the government authority to track, block, or seize terrorist assets.

The Cuban government continued to permit some U.S. fugitives—including members of U.S. militant groups such as the Boricua Popular, or Macheteros, and the Black Liberation Army to live legally in Cuba. In keeping with its public declaration, the government has not provided safe haven to any new U.S. fugitives wanted for terrorism since 2006. 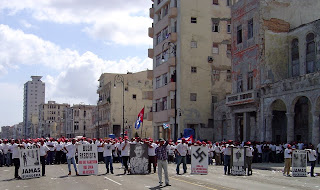 Havana, 2003
Acting Coordinator for Counterterrorism Ronald Schlicher gave additional details during a Q&A with reporters. From the transcript:

QUESTION: -- the language on Cuba in the section on state sponsors of terrorism, it’s quite a lot less harsh than last year. And I’m wondering if this is sort of laying the groundwork for taking Cuba off the list of state sponsored terrorists.

MR. SCHLICHER: Actually, I don’t think this report is laying the groundwork for anything, because this report is intended as, in a very real sense, a snapshot of the terrorism-related activities for each country for the year 2008. So the narrative as you see it, in fact, represents that snapshot.

QUESTION: Sir, you’re saying that there are some neighbors of Colombia that provide a space to the FARC, to the members of the FARC to move. Which countries are you talking about specifically? And is there any confirmed link between the Venezuelan Government and the FARC or support?

MR. SCHLICHER: Well, Cuba, of course, remains on the state sponsors list. And Cuba does tolerate the presence of members of terrorist groups, including the FARC, including the Colombia National Liberation Army, and, in fact, ETA. We also note that the Venezuelan leader has praised the FARC on many occasions as well. We think that’s extremely problematic. You don’t go around praising a foreign terrorist organization.

I take these reports seriously. I am sometimes sarcastic or flip when writing about U.S. officials. To be fair, there are many intelligent, talented and hard-working people in our government. And I have great respect for many of the U.S. officials I've interviewed over the years. 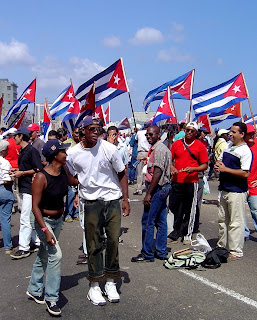 Marchers dance. Havana, 2003
That said, I am naturally wary of reports coming from the U.S. government, just as I'm suspicious of statements from the Cuban government. Politics can influence threat assessments. Consider, for instance, the non-profit Center for Public Integrity's Iraq War Card, which says: 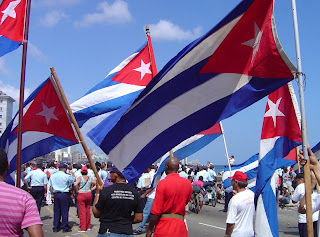 Marching along the Malecon. Havana, 2003

The state sponsor designation isn't just another pile of paper. It can have real consequences. By law, U.S. authorities can impose an array of restrictions on the so-called terrorist nations. According to the State Department, these restrictions include:

1. A ban on arms-related exports and sales.

2. Controls over exports of dual-use items, requiring 30-day Congressional notification for
goods or services that could significantly enhance the terrorist-list country's military
capability or ability to support terrorism. 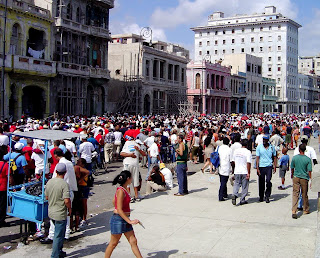 4. Imposition of miscellaneous financial and other restrictions, including:

* Requiring the United States to oppose loans by the World Bank and other international financial institutions
* Exception from the jurisdictional immunity in U.S. courts of state sponsor countries, and all former state sponsor countries, with the exception of Iraq, with respect to claims for money damages for personal injury or death caused by certain acts of terrorism, torture, or extrajudicial killing, or the provision of material support or resources for such acts
* Denying companies and individuals tax credits for income earned in terrorist-list countries
* Denial of duty-free treatment of goods exported to the United States
* Authority to prohibit any U.S. citizen from engaging in a financial transaction with a terrorist-list government without a Treasury Department license
* Prohibition of Defense Department contracts above $100,000 with companies in which a state sponsor government owns or controls a significant interest.
Posted by alongthemalecon at 7:42:00 PM

fine looking blog. I'll be sure to check-in.

do you have anymore information on Bisa Williams-Manigualt? Yale writings, per chance? : )

I noticed that at one stage she worked at NSC under Bush. So I also wonder if she gave money to McCain too.

She's also listed as having accompanied Bolton to at least one high level meeting while he was stirring up trouble at the UN.

One wonders about the ethics of these people in Washington.

I don't know much about Bisa Williams. I'm interested in learning more and would love to interview her at some point for a story.
Thanks for your message. I'll add your link to my blog.