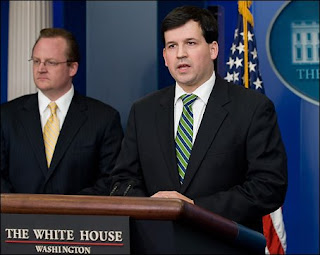 Dan Restrepo, all dressed up and telling reporters: "U.S. policy towards Cuba is not frozen in time."

Photo credit: Saul Loeb/AFP/Getty
I'm working on several Cuba projects over the summer and I need to get up to speed on the American officials who might have Barack Obama's ear when it comes to U.S. policy toward Cuba. I am just starting to dig around for information and don't have all the answers. But I'll share some of the legwork I've done so far on Dan Restrepo, Jonathan Farrar and Bisa Williams.

I'll start with Restrepo, special assistant to the president and senior director for Western Hemisphere Affairs. On April 13, he announced new rules making it easier for Cuban-Americans to travel to and send money to Cuba.

Before joining Obama's team, Restrepo was director of the Americas project at the Center for American Progress, a research center. 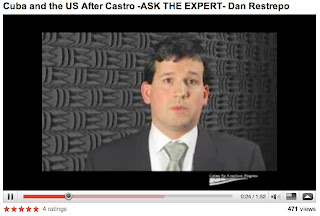 In this March 2008 video, Restrepo gives his views on U.S. policy toward Cuba. Note the please-hire-me-Obama coat and tie 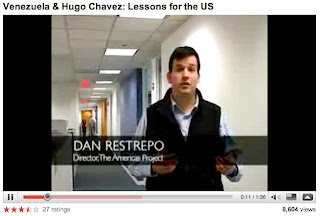 In this November 2006 video about Venezuela and Hugo Chavez, Restrepo is dressed a bit more casually, as in, "Ties? We don't need no stinkin' ties." 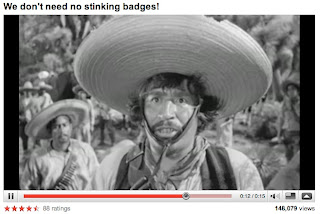 Treasure of the Sierra Madre, 1948
In the 2008 video, Restrepo, who describes himself as "half Colombian," calls for a more flexible and reasonable policy toward Cuba. He says the U.S. should "step away" from the Helms-Burton Act. The sweeping 1996 law sets out how the U.S. government would deal with the Cuban government in the post-Castro era. It bars, for instance, the American government from recognizing any future Cuban government unless that government compensate the owners of non-residential Cuban property worth more than $50,000 in 1959. 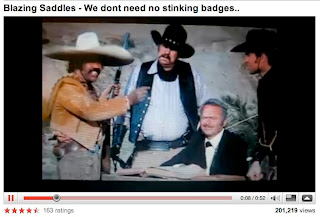 Mel Brooks' Blazing Saddles, 1974
But Restrepo doesn't suggest any dramatic moves on the part of the U.S. and says Cuba's "successor regime" - the government that Raul Castro now leads - "holds the key."

"The onus in many ways rests with Raul and those around him," he said.

Restrepo evidently expects the Cuban government to make some significant concessions - and then, perhaps, the United States will respond. That seemed to be the message in the video. And that's the scenario that played out in the Summit of the Americas. The media, analysts, bloggers and others raised expectations of a thaw in U.S.-Cuba relations, but little happened. There were no ground-breaking developments. With little to say, some reporters wrote about Restrepo as the first person to speak a language other than English at a White House briefing.

Speaking Spanish at the White House is great, but the way I see it now, both the U.S. and Cuba will have to be much bolder if they're going to break through 50 years of terrible Cold-War relations and make progress toward normalization.

Jonathan D. Farrar has been the Chief of Mission at the U.S. Interests Section in Havana since July 2008, the the Interests Section Web site says. Previously, he held senior positions in the State Department’s Bureau of Democracy, Human Rights, and Labor. I've never interviewed him. One source told me he's reserved, intelligent and thoughtful. 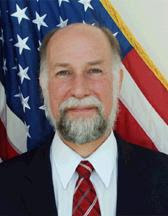 Source of photo: Interests Section Web site
As acting assistant secretary from August 2007 to March 2008, Farrar oversaw the bureau's human rights and democracy programs around the world. From 2004 to 2005, Farrar was deputy assistant secretary in the State Department’s International Narcotics and Law Enforcement Bureau. 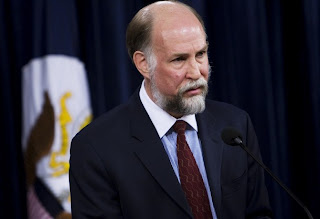 Photo credit: Getty Images
He is a Los Angeles native and joined the Foreign Service as an economic officer in 1980. During his career, he has been posted in Uruguay, Mexico, Belize, Paraguay and other locations. His education includes stints at California State Polytechnic University Pomona, Claremont Graduate School and the Industrial College of the Armed Forces.

She heads the Office of Cuban Affairs at the State Department. She also has a top-notch education. I couldn't find her bio online, so my information on her is sketchy. But she evidently attended Yale University, according to a public profile for a Bisa Williams at LinkedIn. If this is the same Bisa Williams, she earned a master's degree in comparative literature from the University of California, Los Angeles, in 1981.

I don't know how old she is. I'm guessing late 40s, although a Facebook picture for a Bisa Williams in Washington, D.C. , looks like a younger woman. Maybe she's just one of those lucky ones who doesn't seem to age.

Photo credit: Facebook
Williams, also listed in some directories as Williams-Manigault, is the former director for United Nations and International Operations  for the National Security Council.

Williams is a career Foreign Service officer. During the third quarter of 2008, she donated $1,180 to Barack Obama's presidential campaign, according to the Huffington Post. 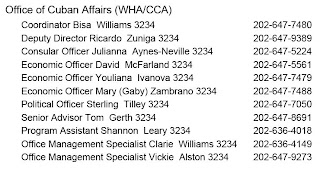 If anyone has any other interesting tidbits, please send them along. Thanks.