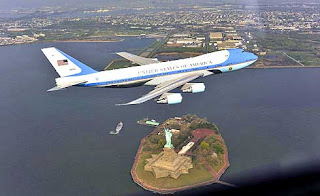 Lovely photo. Our tax dollars at work.
Another White House aide has skedaddled, but this one isn't Cuban.
Louis Caldera quit over the photo-op that triggered a Sept. 11-like panic in Lower Manhattan on April 27.
Caldera, a former Army secretary, is a Mexican-American who led the White House Military Office. He took responsibility for the photo shoot of Air Force One flying over New York. Estimated cost to taxpayers: $328,835 to $357,012 or about what a Walmart cashier earns in 20 years. 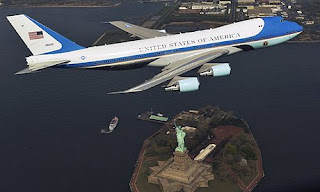 Here's the same pricey photo as it appeared, cropped and Photoshopped, in The Guardian. The view from the ground that day. Photo credit: Jason McLane / Associated Press 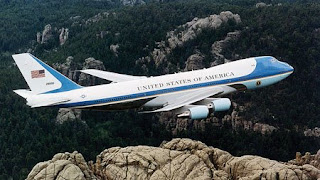 Another White House photo of Air Force One. I wonder how much this little baby cost us.

Another White House aide, Felipe Sixto, resigned last year after he was accused of stealing more than a half million dollars in pro-democracy funds for Cuba. A Cuban-American, he worked for then-President George Bush.

Link:
Felipe Sixto case: All because of those #!%#& Chinese radios