Castro brothers rarely together in public 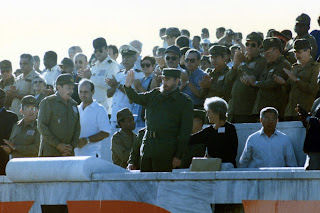 Fidel Castro waves as Raul watches
You don't see Fidel Castro and his brother Raul together in public very often. That's because if one is assassinated, the revolution can continue, conventional wisdom says.
I once saw them together at a rally and shot the photo above.
Below, the Castro brothers confer in a UPI photograph taken in July 1959. That was when Fidel Castro announced he was resigning as prime minister to protest demands that then-President Manuel Urrutia resign.
The Cuban Cabinet refused to accept Castro's resignation. Urrutia, a declared anti-communist who clashed with Castro, soon quit and moved to the United States.
Castro stepped back into his role as prime minister and consolidated his power, eventually becoming the country's undisputed leader. 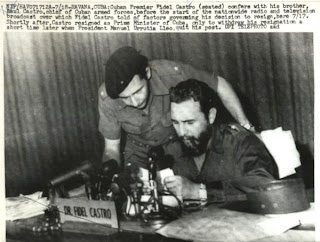