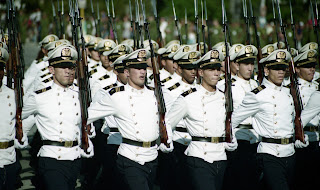 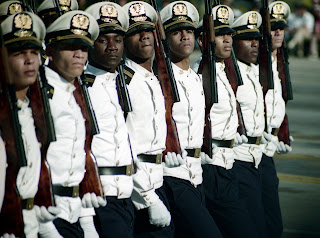 Drill command: Eyes right.
Click this picture or the one above to download a free screensaver.
Cuba's armed forces suffered "acute and dramatic" neglect after the fall of the Soviet Union, according to the World Security Institute. But in recent years, military spending has climbed as Cuba makes strategic upgrades to its military technology.
The institute said Cuba is responding to "the threat it sees as most likely: a possible air strike."

Cuba is also forging economic and diplomatic relations with countries that can furnish its military with the equipment it seeks, including Russia and China. 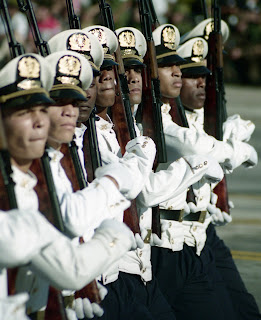 ...up until 2007, the Cuban navy consisted of four patrol craft with surface-to-surface missile capacity, and one coastal patrol craft.

In 2007, that inventory went up to six navy ships with missile capacity, and stayed there into 2008. Although the military budget has increased, there has been little arms buildup. 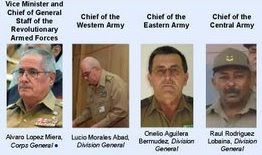 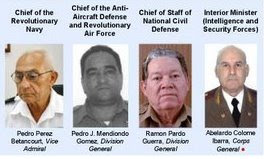 The head of the Marina de Guerra is Vice Admiral Pedro Perez Betancourt, immediate left, above. The others shown in the pictures are Cuba's top military leaders, according to an organizational chart released by the Open Source Center.
In April, a dozen retired U.S. military officers urged the Obama administration to end the ban on travel to Cuba and work toward lifting economic sanctions against the socialist government, Defense News said.
Links:
Cuba's Revolutionary Armed Forces
Wikipedia entry for Military of Cuba
Photo of the Marina de Guerra Revolucionaria headquarters
Posted by alongthemalecon at 3:53:00 PM