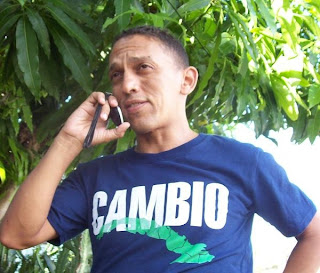 Rolando Rodríguez Lobaina. Source of photo: Plantados
The United Nations marked World Press Freedom Day on Sunday as some bloggers and human rights activists criticized last week's arrest of two dissidents in eastern Cuba.
Cuban authorities on Wednesday detained Rolando Rodríguez Lobaina and his brother Néstor, leaders of the Cuban Youth Movement for Democracy in Baracoa, according to the blog, Uncommon Sense, dedicated to helping free Cuban prisoners.
Police are processing the brothers on charges of "disturbance of the peace," the Cuban Democratic Directorate said. Police searched their home and confiscated a laptop, books and a radio.
Two weeks earlier, in an April 17 article, Rolando Rodríguez had complained that "repression against the internal opposition and also against the people has grown considerably."
He also wrote about an April 9 press conference in Havana, where dissidents disclosed that they had sent a letter to Barack Obama, telling the American president that if the U.S. government can't guarantee that money for dissidents actually reaches the opposition, then it should not send any aid.
The letter didn't name names, but said it was "scandalous" that some of the pro-democracy funds destined for Cuba had been mishandled. Former White House aide Felipe Sixto is serving 30 months for stealing more than a half million dollars from Center for a Free Cuba.
The letter also asked for the release of political prisoners and respect for human rights.
Press freedom has declined around the world, the Freedom House reported on May 1. Only 17 percent of the world's population has a free press, Freedom House said. 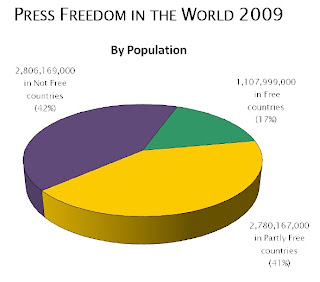 Source: Freedom House
In a 2009 report, the group evaluated press freedom in 195 countries. Twenty-three nations ranked ahead of the United States. Cuba was tied for 190th place.
Cuban officials have called such reports biased.
Uncommon Sense lists 27 Cuban journalists who are in jail. The Committee to Protect Journalists said there were 21 Cuban journalists in jail in 2008. Paris-based Reporters without Borders, also known as RSF, puts the number at 23.
Cuban officials have disputed whether many of those are actually journalists, saying few studied journalism and many are "mercenaries" with a pen. This article captured that sentiment:

RSF continues to assert that "23 journalists" are in jail. For the organization it is enough for any Cuban, attracted by the profitable dissident business, to write three lines against his government to earn the title of "independent journalist."