Fidel Castro: Jury still out on the Obama administration 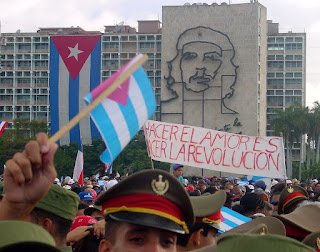 Making Love is Making Revolution
May Day, Havana, 2001
Hundreds of thousands of Cubans are on the streets today celebrating May Day, also known as International Workers' Day.

In an essay released on the eve of mass rallies, Fidel Castro said it's not yet clear how the Obama administration will treat the socialist government. He said he’s studying the administration’s every move. 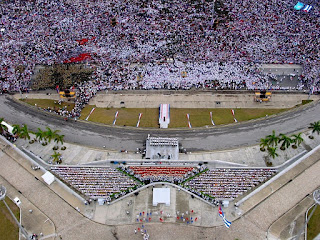 From atop the 358-foot José Martí Memorial, May Day, 2001
Castro said no one should think the Cubans are going to surrender their revolutionary ideals.
Excerpts:

We are not incendiary as some imagine, but nor are we fools who let themselves be fooled easily by those who believe that the most important things in the world are the laws of the market and the system of capitalist production.

Today the planet is torn between economic crises, pandemics, climate change, the dangers of wars and other problems. Policy matters become more complex, and there are still those who have the illusion that people can be operated like puppets.

The clash of the powerful North and the Cuban Revolution was inevitable. The heroic resistance of the people of our small country was underestimated. 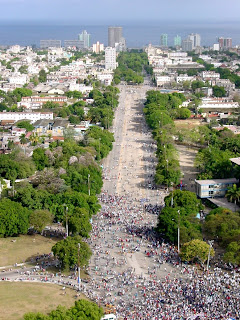 Link:
Along the Malecon's Fidel Castro page
Posted by alongthemalecon at 6:13:00 AM