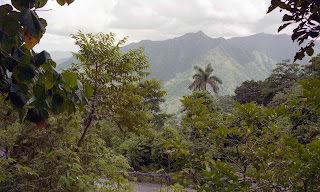 Pico Turquino, at 6,476 feet above sea level, is the highest point in Cuba

Fidel Castro's once-secret command post in the Sierra Maestra is more than a half century old by now.
Castro loyalists treat it as a shrine of sorts. I went there in 1996 and wrote a story about it for the Dallas Morning News.
I traveled to La Plata with Erich Schlegel, a photographer friend now based in Austin. It was drizzly and overcast when we hiked along the path to the command post.
A paved road took us close to the site, but we had to get out of the jeep and walk the final stretch. That's by design, a guide told us. Keepers of the command post want visitors to get a taste for what the terrain was like for Castro's rebels in the 1950s. 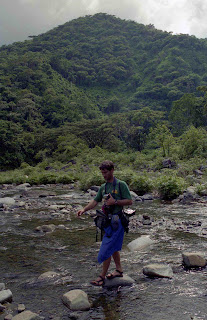 Crossing a stream
The Cuban government considers La Plata to be a national monument. An Associated Press reporter traveled there in December 2008, just before the 50th anniversary of the Cuban revolution. He reported seeing childhood photos and books, including Machiavelli's "The Prince," near Castro's old writing desk.

It was at this desk that he scrawled a note to Celia Sanchez, a top rebel fighter and his rumored mistress, after Batista's air force bombed a nearby village. "The Americans will pay dearly" for supporting Batista's military, he wrote.

"Once this fight is finished, I'll begin the real struggle of my life, the fight I will wage against them," he wrote, calling it his "true destiny."

The AP story reminded me that I haven't been back to La Plata since 1996. But maybe I'll return one day. It was a great to explore the Cuban countryside and see a piece of history.
From my 1996 story:
LA PLATA, Cuba -- Near the end of a tortuously steep path, hidden in the shadows of the dark green forest, lies one of Cuba's most cherished treasures.
It is carefully guarded and meticulously cleaned by a staff of nine. Visits are by permission only. Photographs generally are banned.
This revered hideaway -- a simple wooden shelter -- is tucked away in the Sierra Maestra, a rugged stretch of peaks along Cuba's southern coast. It was from here that a young lawyer named Fidel Castro led a ragtag band of rebels on what seemed a suicidal quest: to defeat 10,000 Cuban troops and topple a U.S.-backed dictator.

*
"For us, Fidel is the father. We're the children. And we're devoted to our father," said Luis Guerra, 61, one of thousands of peasants who aided Castro and the other rebels during the 1958-59 war. 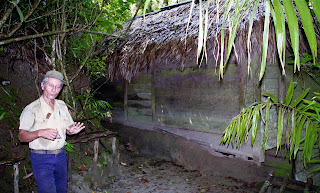 Our guide in 1996
Castro's critics contend that he has stayed in power by creating a one-party state, crushing all opposition and making political dissent a punishable offense.
But in the green hills of the Sierra Maestra, campesinos say they remain faithful to Castro because the revolution brought real change to their lives. Workers built schools, health clinics and roads where there were none. Chunks of land were broken up and distributed to the poor.
"If it weren't for the revolution, there'd be nothing out here. We've taken great steps forward," said Luis Verdecia, a coffee grower who lives near the former rebel hideaway, called La Plata. 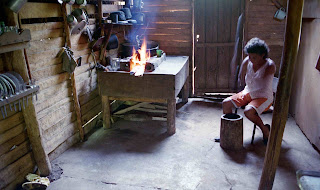 A woman in a nearby village smashes up coffee beans the old-fashioned way. The camera's slow shutter speed and the blurred motion makes it appear as if she has no hands, but she really does have all her limbs.

... when Agusto Gonzalez, 48, didn't have money to buy a television antenna, he improvised, making one out of sticks, a tree branch, a rubber tube, aluminum and wire.
"It may not look like much, but it works," he said.
His ranch is filled with Robinson Crusoe-style devices. One contraption -- made with a bicycle rim, a pulley, nylon string and a bucket -- fetches water from the river, down an embankment about 20 yards away.
"You need something, you invent it," said Gonzalez, a coffee grower. "That's how we do things."

*
Education is a priority. On a recent afternoon in Santo Domingo, a group of children gathered on neighbor's porch for an after-class homework session, led by the brightest students.
Yoannia Martinez, 12, read quietly from a sixth-grade text, sprinkled with patriotic messages. From Page 132: "Our motto will always be Country or Death!" 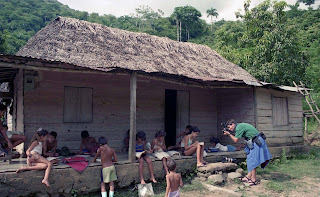 Erich photographs schoolchildren
Cuba's shift to socialism enraged the United States, sent wealthy Cubans fleeing to Miami and triggered a U.S. trade embargo. But the campesinos of the Sierra Maestra remain grateful for the free schooling and other benefits.
"When my mother was my age, there were no hospitals. My mom gave birth at someone's house," said Oslaida Tejeda, 24, one of a few dozen residents in the mountain village of Jimenez.
Now pregnant herself, she gets regular checkups, already has had an ultrasound and plans to give birth at a hospital in the nearby town of Bartolome Maso.

*
Some Cubans feel so indebted to the Castro regime that they donate time and money to the government.
Clovilde de la Paz, 56, a cook in Santo Domingo, makes desserts in his spare time, sells them and hands over the proceeds to the authorities. His total contribution since 1994: 5,605 hours of labor and about $1,500, a small fortune by Cuban standards.
"I do what I can," he said. "I'm with Fidel."

Cuban exiles in the U.S. criticize Castro, saying he represses dissidents and stifles any attempts to form a political alternative.
Supporters of the revolution say such measures are necessary as long as Cuba has the United States as an enemy. And they vow that the revolution will survive well into the next century.
"There are always ups and downs, but I think things will get better and the revolution will move ahead," said Edith Verdecia, 37, a resident of Santo Domingo.
Posted by alongthemalecon at 8:13:00 PM

"Castro's critics contend that he has stayed in power by creating a one-party state, crushing all opposition and making political dissent a punishable offense.Wow, so after 50 years of unelected rule it's still only a "contention" that Communist Cuba is a tyranny!

I think you're right...
'Castro's critics said' would have worked better.