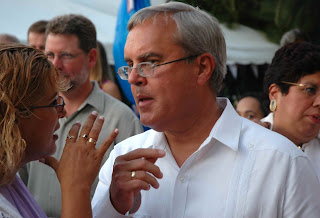 James Cason
Babalu reported the other day that James Cason is now president of the Center for a Free Cuba, a pro-democracy group. Cason is the former chief of the U.S. Interests Section in Havana. Henry Louis Gomez of Babalu praised Cason, saying:

Of all the men and women who have held that post, none has done more to advocate for Cuban liberty than Ambassador Cason.

During Cason's tenure, workers installed an electronic message board along the top of the Interests Section building. Soon everything from human rights slogans to baseball scores was flashing across the board. In response, Cuban officials quickly planted a forest of poles topped with flags that block the message board from view. 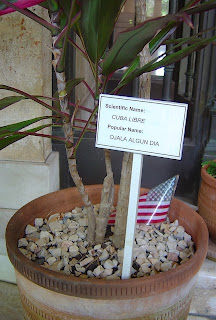 I spotted this plant outside the U.S. ambassador's residence in Havana. It says - Scientific name: A Free Cuba. Popular name: Someday I hope.
I'm not sure if this plant was Cason's idea or not, but I'm pretty sure it was there while he was the U.S. chief. 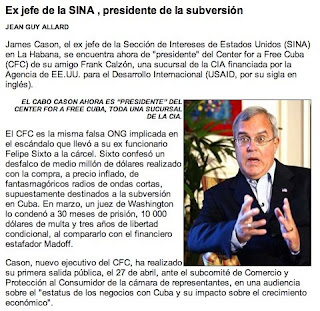 Granma's story on Cason's new job
Granma newspaper today described the former ambassador as the pro-democracy group's new "president of subversion."
The state-run paper contends that the Center for a Free Cuba is a CIA front, a claim the organization denies.
Posted by alongthemalecon at 9:48:00 PM

As a good representative and promoter of the policies of Yankee imperialism, Corporal Cason, would never be in favor of anything that would truly benefit the Cuban people.

The imperialists will never understand or recognize that Cuba became a free and independent country on January First, 1959. American neo-colonial exploitation came an end on that day.

Who exactly is free and independent in Cuba?

Stop blaming America for everything. Your own people are tired of it.

Let Cuba have free elections. Let it's people travel and speak freely like um HELLO the rest of the world.

YES Castro stood up to the US for over 50 years but what exactly did he gain for his people? It's one of the poorest countries in the world.