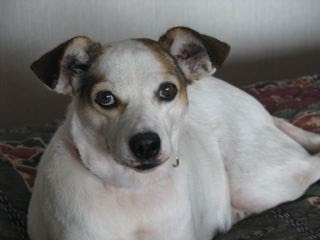 Thanks to Judith Saunders for sending an update on Dulzura, the street dog she adopted in Tarara. I knew the dog as Blan Blan or Blanquita. She gave birth to three litters of puppies at my home until I finally had her spayed.

Later, a well-meaning veterinarian put the pooch under the knife again, not knowing she had already had the operation. The mistake may have saved her life because the doctor discovered tumors that had to be removed. 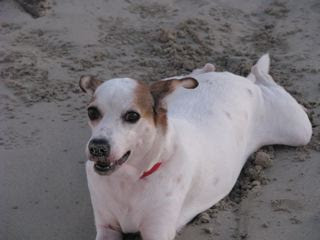 Someone likes to dig.
Judith fell in love with tail-wagging Blan and took her to Canada. But the dog, renamed Dulzura, returns to Cuba every year. The family stays in Guanabo, east of Tarara. Judith writes:
"Dulzura remembers the people she has met before in Cuba... We occasionally meet former staff from Tarara and she greets those she likes with zeal. She has discovered that she can be playful and loved to race up and down the beach in Guanabo when we went there for our walks. She gets very excited when she meets friends and started playing with several other dogs..." 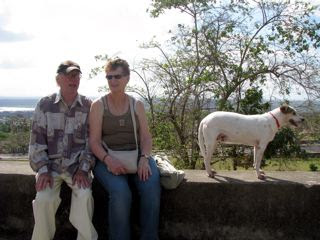 Judith with her husband, David Carlin, an artist who has displayed his work in Cuba. And you already know the one on the right.