If China, why not Cuba? 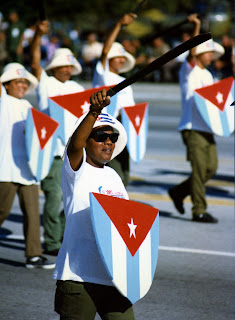 Machete power
We don't have any qualms about diplomatic relations with China, but we remain wary of Cuba. The Examiner asks why.

Lately, the new American administration has made overtures to “enemy states,” one of which is Cuba. But my question is: why did it have to take this long?
The government tells us that we can’t deal with the island nation because it is Communist. Well, isn’t China Communist too?
...if we can deal with China, then we surely should be able to deal with our close neighbor as well.

The imperialists, specially those who belong to the Republican Party, can never forget what happened on January First, 1959, ninety miles from their southern coast.

Hopefully, with pragmatic leaders in the White House and the Palacio de la Revolucion, things will change for the better, without surrendering Cuba's national sovereignty.

I guess we'll see what happens...

Not to mention the billions that China has invested in America. Last time I've checked the US owed them lots of money. And China certainly is a much bigger potential market than Cuba will ever be. So I guess it's not just pride that's involved, but something much more important: money.

I wonder if perhaps we depend on China more than China depends on us.

I think so...
I'm not sure how reliable this informations is, but I've heard it from several different sources.

I think this is a good place to interchange opinions , and express freely .
we all want peace , and live in this world for good or bad , we need to get along , and forgive

if the u.s. and cuba start migration talks, that could be a start...
then again, maybe not.
there's a lot of bad blood