Leaked documents offer a Who's Who of Cuba 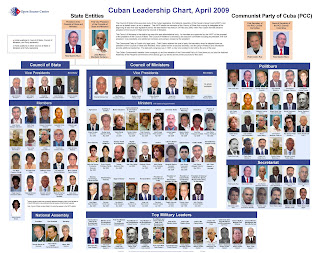 Click chart to see full-sized version
Secrecy News has posted two background documents on the top leaders of the Cuban government. One document is a 17-page report dated April 16 giving an overview of the leadership. The other document is an organizational chart, shown above.
The Open Source Center, based at the CIA, compiled the reports, which are not classified, but weren't meant for public release.
Then-CIA chief Porter Goss and former director of National Intelligence John Negroponte announced the creation of the Open Source Center in November 2005. Negroponte said:

The Open Source Center is the centerpiece of my response to the WMD Commission’s recommendations calling for the Intelligence Community to devote more attention and resources to exploiting openly available information.

...Will advance the Intelligence Community’s exploitation of openly available information to include the Internet, databases, press, radio, television, video, geospatial data, photos and commercial imagery.
The Center’s functions will include collection, analysis and research, training and information technology management to facilitate government-wide access and use.
The Center will build on the established expertise of the CIA’s Foreign Broadcast Information Service (FBIS), which has provided the U.S. Government a broad range of highly valued products and services since 1941.
The Director of the CIA will administer the Center on behalf of the DNI.

Now if the CIA could just start killing everybody on this list. Problem solved. Free Cuba.