Little-known side of Fidel Castro, the schmoozer 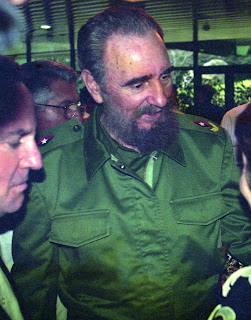 Fidel Castro work a crowd of American visitors
I've only met and spoken with Fidel Castro once and I saw a side to him that few Americans see.
His foes regard him as tyrant, a dictator. Some have even plotted to kill him. But whether you love him or hate him, the man is a master politician.
I had gotten that sense from hearing Fidel give speeches. I've watched him stand in front hundreds of thousands of Cubans and talk to them as if he's sitting in their living room.
But I didn't appreciate his charisma until seeing him in action at a reception for American business people. He worked the room like a mayor or governor in the midst of a tight re-election campaign.
Castro smiled, he listened. He put his hand on your shoulder or your arm when he talked to you. He gave you his full attention. 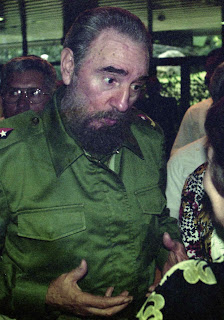 Looking people in the eye
While all this went on, Fidel's security personnel maintained a circle around him. Members of the security team let people in the circle one or two or three at a time to talk to Fidel. Then the circle closed as these burly men in white guayaberas protected the commander of the revolution.
The Cuban government had organized the reception. I'ma little fuzzy on the location, but I believe the reception at the Hotel Palco in the same Siboney neighborhood where Fidel Castro lives. 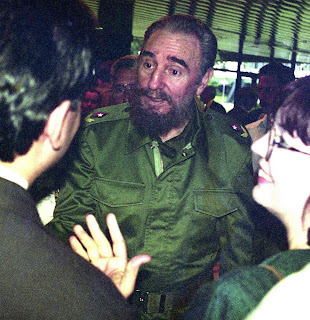 Talking, listening
Kirby Jones brought the American delegation to Cuba as part of the second U.S.-Cuba Business Summit in March 1998. Those attending include Sam Gibbons, the Tampa native and former Florida congressman; Craig Fuller, ex-chief of staff for Vice President George H. W. Bush; and William Lane, chairman of USA Engage.
I took pictures at the reception and was determined to shoot everything using a minimal amount of flash or no flash at all. I was in one of those phases. I wanted to shoot everything using existing light. Well, I picked a bad time for that and the pictures aren't very good. They're grainy. They're scanned from slightly discolored 35mm color negatives and none of the pictures was ever published. Still, I wanted to post them here so you could see another side of Fidel Castro. 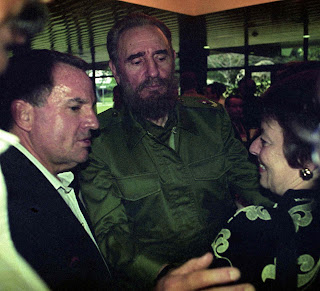 Fidel's trademark hand on the shoulder. Some say the former Cuban president makes you feel like you're the only one in the room. That's Kirby Jones on the left.
I've known Kirby Jones for many years. I always like talking to him because he's been going to Cuba for more than three decades now and knows a lot about the island and the people there.
He first traveled to Cuba in 1974 as a special correspondent for CBS News and took part in interview with Fidel Castro. Since then, he's been a consultant to American companies interested in doing business in Cuba. He has also testified before such groups as the International Trade Commission of the U.S. Department of Commerce, according to the Web site for his company, Alamar Associates in Bethesda, Md. 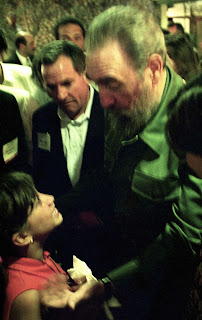 Kids get attention, too 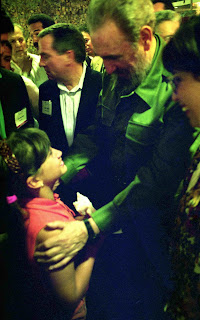 The girl is delighted
I know some Cuban-American activists strongly oppose doing business with Cuba - and with Fidel Castro. Some of them contend that American investments in Cuba would not be safe as long as Fidel Castro and his brother Raul are around. But Jones is upbeat about the opportunities. Here are some of views -

On the Cuban economy:

Those who maintain that Cuba is but an out-of-date left over country which fanatically is clinging to a rigid and static state controlled economy are either simply misinformed, are wrong, or are purposely misrepresenting the economic reality in Cuba to promote and to achieve their own political agenda.

Far from being dogmatic and inflexible about the economy, he has rather shown a remarkable flexibility and adaptability.

On U.S. trade with Cuba:

After 40 years of no trade and in just a bit over six years, the US has become the country which supplies more food to Cuba than any other and Cuba has become the 25th largest market for US agricultural products.

On the importance of face time in Cuba:

As with anyone else in business, Cubans like to do business with people they know. A one time visit is not sufficient; the more face time there is, the better.

U.S. firms thinking that they will simply walk in, set up offices, hire staff, open a bank account, order phones and start marketing and selling are in for a rude awakening. It takes three years, for example, for a foreign company to be accredited to open an office or to hire its own staff.