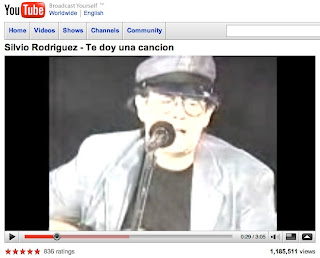 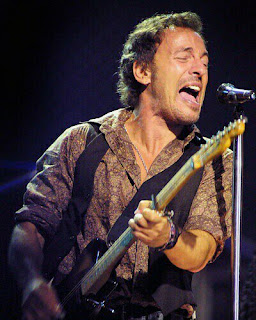 One of my all-time favorites: Bruce Springsteen. Source of photo: Examiner.com
I think I understand the rules, the theory behind what U.S. officials are trying to accomplish. Our government doesn't want to admit any Cubans who might promote the politics of the socialist government. And there's little doubt that Silvio Rodriguez, once in America, would somehow push Cuba's political agenda.
Rodriguez is a musician, sure, but there are politics behind his music - and Seeger's, too.
But by refusing to let yet another Cuban artist into the United States, we're only giving Cuba more ammunition to hammer the U.S. as intolerant and belligerent.
We demand that Cuba allow freedom of expression on Cuban soil, then refuse to let Cuban artists express themselves in the U.S.
The visa denial supports my theory that despite the election of Barack Obama, America's policy toward Cuba hasn't changed all that much. Maybe it will change. Maybe something's going on behind the scenes. But I haven't seen any evidence of significant change.
I don't know the music of Silvio Rodriguez well. I met the singer once and took some pictures. I didn't interview him, but I hope to get the chance to talk to him one day.
After the visa denial, he wrote:

I believe that the attitude of the State Department is very contradictory, given the desire expressed by President Obama to bring the United States closer to Cuba. As a Cuban cultural worker, I continue to feel blockaded and discriminated against by other governments. Hopefully this will truly change someday.

That's sad. Specially in a country where freedom of speech is something as powerful as it is in the US. Like you said, it only gives the powers to be in Cuba more reasons to vilify the americans, and slow down even more a process that's already slow enough. To me it seems like two kids that got in a fight with each other, and they refuse to say I'm sorry, unless the other one says it first.

That is a nice Bruce photo and link. Thanks! Sad story, however.

Thiago,
Yeah, the two countries are like kids sometimes. There's so much bad blood and it goes back years.

M Denise C,
I'm glad you mentioned the photo because I had forgotten to add the credit. It's not my picture. I went to see Bruce Springsteen in Jacksonville not long ago, but not as a journalist and I couldn't get a camera in to the show.

You do realize that the visa was requested in Paris on April 23 and he gave up on May 1? For something that can take up to a month?

Eight is Enough,
Excellent point about the freedom to travel in and out of Cuba. I can how some would consider that hypocrisy.
You make another good point on the logistics of getting a visa so quickly. I didn't realize Silvio Rodriguez had appied for the visa on April 23.
Thanks for the additional information. Tracey