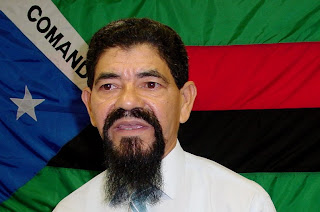 Leader of Comandos F-4: Claims his group has "clandestine cells" in Cuba

Rodolfo Frometa has dedicated his life to a single task: Getting rid of Fidel Castro. His office is along West Flagler Street in Miami, one of the only cities in the world where unsuspecting visitors sometimes stumble across storefront shops aimed at toppling foreign governments.
Frometa, 62, predicts the Cuban government will fall within five years, socialism will disappear and free elections will be held. And he said he is doing all he can to help make it happen.
He is the commander-in-chief of a controversial paramilitary group called Comandos F-4.
"At no point should the president of the United States negotiate with Cuba," he told me in an interview. "The U.S. government should not lift the trade embargo unless Cuba releases all political prisoners."
Frometa is passionate about political prisoners, having been one himself in Cuba.
At 14, he supported the Cuban revolution. "I was a campesino like any other," he said.
But he said he soon grew disillusioned with the revolution because "it seemed like it turned people into slaves."
So he fought against the socialist government and was jailed. 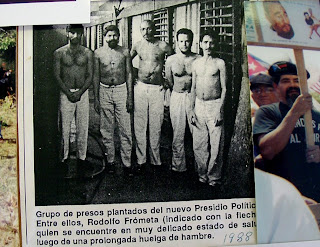 From the wall in Frometa's Miami office. Prisoners in Cuba. The arrow points to Frometa.
After his release, Frometa journeyed to the United States. He's been trying to undermine the socialist government ever since.
"There won't be a peaceful transition to democracy in Cuba," he said. "The system has to be removed by force." 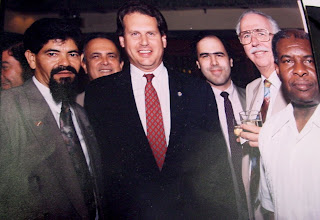 In another photo from Frometa's office, the paramilitary leader poses with U.S. Rep. Lincoln Díaz-Balart, a Florida Republican who opposes the socialist government

Frometa claims that "65 percent of the armed forces" in Cuba secretly support his group. And he says his group's "clandestine cells" have quietly posted "hundreds" of Comandos F-4 stickers and banners throughout Cuba, Frometa said.
Some of the stickers read, "Down with the tyranny." And they're posted at bus stops and other locations, he said.
"Police take down one and two or more appear."
Cuban officials dispute that Comandos F-4 has any support in Cuba and say Frometa pretends to have a secret clandestine network so he can raise more money for his cause.
Even so, Cuban officials say they take such groups seriously because they are capable of carrying out violent attacks.

More from Frometa's office: Photos of anti-Castro activists
Frometa said Comandos F-4 is "preparing the conditions" to attempt simultaneous strikes against the Cuban government in three to four provinces in Cuba this year. He declines to elaborate, citing "military secrets."
Some Cuban officials say they wonder why U.S. authorities don't do something about Comandos F-4 and other paramilitary groups.
"They're incubating terrorism," said a Cuban diplomat who spoke on condition of anonymity. "They could get people killed. That is dangerous."
Frometa said he's doing nothing illegal. Prospective members of Comandos F-4 must sign an agreement saying they'll obey state and federal laws before they can join the group, he said. 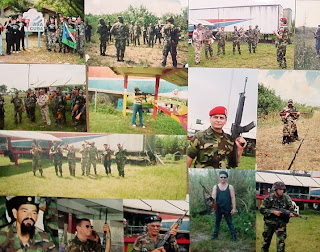 Frometa has gotten into trouble before. Before joining Comandos F-4, he was a member of Alpha 66, another anti-Castro group. Records show:

* On Oct. 19, 1993, authorities questioned Frometa about a boat carrying seven semi-automatic Chinese AK assault rifles and one Ruger semi-automatic mini 14 rifle, equipped with a scope.
* On Oct. 23, 1993, authorities found Frometa and other Alpha 66 activists with an R15 rifle, an AK-47 and a .50-caliber machine gun.  The militants were towing a boat to the Florida Keys. Frometa said they needed the weapons for "a military training exercise....once the officers determined that their activities were legal, they were sent on their way," according to this court document.
* On June 2, 1994, authorities arrested Frometa, now a member of Comandos F-4, after he tried to buy C4 explosives and a “Stinger antiaircraft missile” from an undercover FBI agent. His goal: To kill Castro and members of his inner circle.

Frometa was convicted on federal charges and sentenced to 3 1/2 years in prison.
After he was freed, he returned to a familiar task - trying to push the Castro brothers from power. 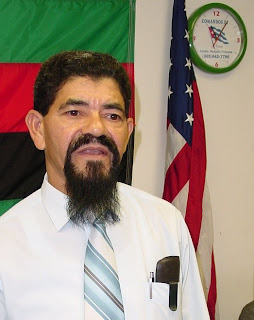 Frometa contends that little has changed in Cuba, even though Fidel Castro is no longer president.
"Raul Castro isn't going to yield on anything," he said. "You can't negotiate with him." 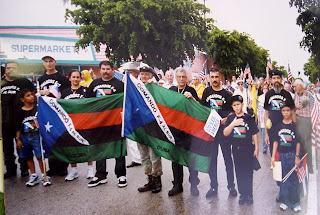 Carlos Frometa is one of the many comemierdas who head very lucrative "freedom fighter" businesses in Miami. Their sole purpose is to engage in fund raising activities among the unsuspecting and gullible viejitos in Calle Ocho. The money ends up in the pockets of these vivebien,

ah, the lure of money

At least once a year, Radio Mambi allows Frometa on the air to raise funds for the F4 Commandos. He tells listeners to call their offices to help out in any way they can, regardless of their age.

They've sold CDs, and boasted about their sabotage campaigns inside Cuba, while on the radio. They've even had ads in local publications to recruit and raise funds.

They've been at it for a while now, but I doubt they have any influence at all.