Trying out a new look - revised

OK, so I can't make up my mind. First I changed the banner. Now I'm thinking the new display is a little much.

You know what might work? A close-up of faded and peeling paint as the banner's background. Then a few photos and the title over that, using a rustic, western or grunge kind of font. That might be pretty cool.
But for now, I think I'll go with one of the banners below. I'm just not sure which one. Let me know what you think. So far I've got one thumbs up on the new banner and one thumbs down. The thumbs down came from a frequent female visitor to the blog, who said, essentially, "Uh, you've got way too many boobs on there. There are boobs here, boobs here and boobs here."
Here are some choices: 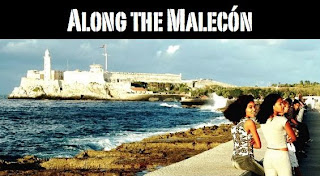 2. Tall version of simple and direct

4. Malecon, one dancer and a Che

5. Malecon and one dancer 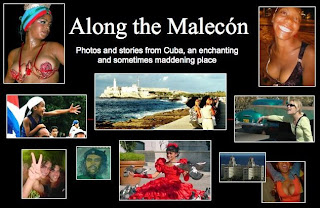 6. Malecon, one carnival dancer, one party girl in an orange dress, one busty woman with a huge smile, a kid with outstretched hand, a desperate hitchhiker, two long hairs and a peace sign, one slightly used Che, one Hotel Nacional, a teen-ager wearing a red dress, a bunch of pigeons, twelve drummers drumming, eleven pipers piping and a partridge in a pear tree

7. The original banner, a lightened photo of the Malecon with some genuine Cubans gathering around

A decision, at last. Kind of.
Ah, heck. I am deciding against the "boobs here, boobs here, and boobs here" banner, in favor of the less flashy version below. And I'll keep it there until I again have a pressing and ridiculous need to waste time and avoid work, which may be quite soon.

Email ThisBlogThis!Share to TwitterShare to FacebookShare to Pinterest
Labels: along the malecon, new banner, new look

That's funny. Just the other day my wife told me, "He really needs to change that header."

yeah, I noticed you change yours all the time. that got me thinking - it doesn't have to be set in stone...

It's very lively. I also think that changing the banner here and there is a good idea. It gives the reader a feeling of interest.

Another advantage to coming up with a new banner is that it gives me the opportunity to avoid actual work that I should be doing :)