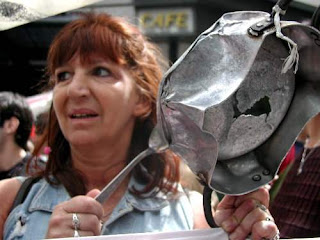 Rule #1 for pot bangers: Cook dinner before the protest in case your favorite kitchen pot doesn't survive the festivities. Source of photo: Tribunal Electoral, Argentina
Pro-democracy activists, bloggers and others in Cuba plan to unleash a thunderous "kitchen chorus" of protest at precisely 8:30 p.m. today.
I don't know who came up with the idea for this ferocious banging of pots, pans, spoons and anything else that makes noise, but Yoani Sanchez of Generacion Y wrote about it last month. Her April 23 post said:

The old pots and pans for feeding the family can be transformed...into the ballot we can’t leave in the box and into the hand we dare not raise in the assembly.
Any object can serve...a piece of fabric hung from the balcony, a newspaper waved in public, a pot banged along with others.

Sanchez said the pot banging is aimed at protesting laws that prevent Cubans from leaving the island freely. She wrote:

Restrictions on coming and going from Cuba have lasted too long. So I will ring my pot for my parents, who have never been able to cross the sea that separates us from the world. I will join the symphony of pans also for myself, forced to travel only in the virtual world in the last two years.

I will pound out the rhythm of the spoon while thinking of Teo, condemned to permanent exile if he happens to board a plane before the age of eighteen. I will beat the drum for Edgar, who is on a hunger strike after seven denials of his request for permission to leave. 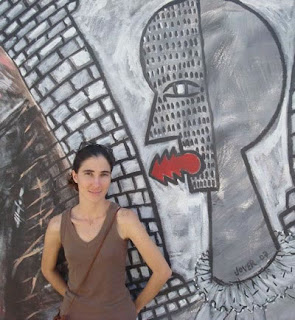 Yoani Sanchez. Source of photo: Proyecto ProCubaLibre
Yoani's post had drawn 2,617 comments when I checked a few minutes ago. No doubt, this metallic protest has created a buzz on the Internet. It'll be interesting to see how many people follow through with the noise-making.
Blogger Claudia Cadelo of Octavo Cerco wrote earlier this week that she hadn't been able to convince anyone to bang their pots and pans. She wrote:

I’ll do it really hard so it will echo and I’ll be sorry if it doesn’t reach the ears of everyone in every part of my city who is also banging.

Some bloggers - such as José Ramón Morales - said they would not support the pot-clanging spectacle if the idea for it originated outside Cuba.
An early call to to bang pots appeared on the influential blog Penultimos Dias. The blog's creator, Cuban writer Ernesto Hernández Busto, wrote that the protest wasn't his idea, but was sent to him by e-mail. 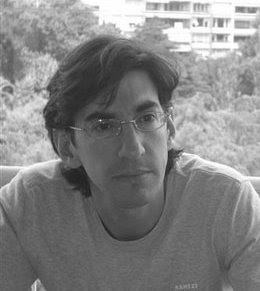 It is time to reclaim our rights, and stop begging those who make decisions for us. Since we can not talk freely, make noise.

It's not a crime to bang on a pot to protest against the inertia and lack of response from Cuban authorities over the legitimate request that the government remove the current restrictions so that all Cubans can travel freely.

I invite you to join us in this initiative...a moment of collective casserole pots that resonates throughout Havana...

In an April 24 post, Hernández Busto said that it did not matter whether the initiative originated in Cuba or "from any point in the universe."
It's a legitimate action - so bang away, he said.
Said Pepe Ramallo on the Babalu blog:

These are the things that Cubans can do for themselves. They need to break through the silence of the international media and start attempting to do things in large numbers.

I wish them all well. Maybe something simple like this will get international attention but now if you are carrying a pot in public in Cuba you can probably be arrested.

I'm no expert on all this stuff, but I think change is healthy, and so are protests, in any country.