Unconventional bank robber had a passion for Cuba 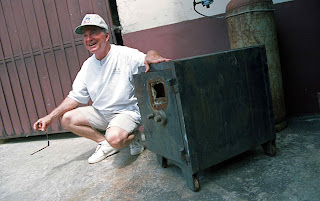 John Stanley, a convicted thief, got a kick posing next to a safe in Cuba

I was on a bus heading toward eastern Cuba one morning when a man suddenly asked, "Are you from Dallas?"

My faded T-shirt _ emblazoned with the words "XXX-CELLENT! Cowboys fend off Steelers to win Super Bowl" _ was a dead giveaway.

Not exactly, I explained. I'm a Denver native, but I work for the Dallas Morning News.

"Are you Tracey Eaton?" the man asked.

"I read your stories all the time," he said.

And that's how I met John Stanley, a fascinating character who went from thief to crime consultant and back to thief again.

Our chance encounter happened almost nine years ago. It gave me an opening for an Aug. 28, 2000, story I wrote about American tourism in Cuba. I described John as a Dallas security consultant who had been to Cuba more than a half-dozen times. Going to Cuba is:


"...like stepping off the plane in 1950," he told me. "The people are so friendly. I tell people in Dallas about the island, and they all want to visit. They're always telling me, `Can I go with you the next time you go?'"

That morning, we'd been riding a bus that was taking foreigners to Cuban tobacco country. I discovered right away that John and I had at least two things in common - a passion for Cuba, and a love for Mexico. 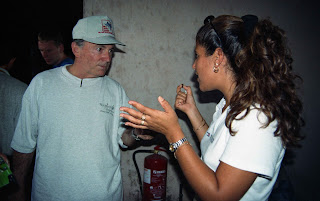 A Cuban guide explains something - chocolate-covered coffee beans, I think - to John Stanley

I was living in Mexico City at the time. John told me he was writing a book, which would be called, Surviving Mexico: The Insider's Guide to Safe Travel.

The book description says of Stanley:


Rich and influential jet-setter or career criminal? From 1978 to 1985, even his family did not know since John Stanley lived the life of the rich and famous. Living in Mexico as a fugitive facing life in prison for bank fraud, Stanley posed as a purchasing agent for the Mexican government, shipping stolen vehicles, boats, airplanes, and heavy equipment across the border.

He hobnobbed with the wealthy and elite of the country, living a lifestyle some could only dream of. More importantly, however, Stanley learned the ins and outs of surviving in Mexico and has revealed the practical knowledge he gained from his experiences in this book.

After serving a federal prison term, Stanley studied sociology and criminology at the University of Texas at Austin and is considered by many in law enforcement, academia and the news media to be an expert on criminal behavior and crime prevention.

I ending up writing a blurb for the book, which you can find on Amazon.com. My blurb said, in part:


...wit, street sense, and uncommon insight, ... Stanley knows how things work in Mexico, ... and how Americans can avoid trouble... 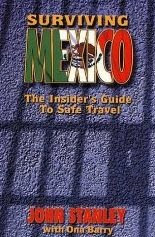 Sometime later, I was in Dallas visiting the home office. John Stanley and his wife invited me to dinner. It was great fun. John told interesting, funny stories. His wife was nice, too. I also remember eating one of the tenderest, best-tasting steaks I've ever had.

John seemed to be on top of the world. He was hosting a nighttime radio show called Crime Wise with John Stanley.

The years passed and I lost track of him.

I was living in Cuba when I heard the news: John had been arrested for allegedly robbing a Commerce Bank branch in Missouri.

News reports said Kansas City police found him in a parked car a few blocks away. He was counting $8,200 in loot as his fake mustache came unglued.


Web sites featuring offbeat news and "dumb crooks" played up his shocking June 2004 arrest. But one of Stanley's former professors, Michael Lauderdale, wasn't quite as surprised. He told the Kansas City Star he'd heard from Stanley recently and he seemed frustrated with life outside prison:

He said, ‘I’ll just go rob a store and get back in where I can survive.' I regarded this as a probability but I hoped it was a faint probability.

On Oct. 14, 2004, Stanley missed a court hearing after he suffered a possible heart attack, according to his federal court records.

I don't know whatever happened to that smooth-talking, multi-talented man I met on a bus in Cuba, but I often wonder what he's doing now.

A Cuban In London said...

That's a little enchanting tale that brought a smile to my face this cold and grim morning here in Blighty. Many thanks.

Thanks! Best to you in London. Tracey

Just read your blog after googling "John Stanley". He is my father and last I researched, as you mentioned, he had been arrested and convicted. He is an entertaining man, isn't he? I met him about 12 years ago in Dallas and haven't heard from him since. I hope he is well.

Thanks for writing, Kimberly.
I did enjoy spending time with your father. I was stunned to learn about the robbery.
I wonder how John is doing in prison. Maybe he'll see this and write a comment...
Best, Tracey

John Lawrence Stanley was convicted today in Federal court in Tulsa OK for three bank robberies committed in Tulsa in 2004. Mounting his own defense,he appeared gratified when an FBI agent told him he had been dubbed "The Bubba-tooth Bandit", in response to Stanley's query "did I ever get a nickname".

Howdy Tracey Eaton:
John Stanley is alive and getting by and can be reached at: John L. Stanley, #16051-077, Federal Correctional Institution-Beaumont, P.O. Box 26015, Beaumont, TX 77720-6015. I have known John since 2000 when I was a professor of criminal justice at the University of North Texas. I feel John's choice was tragic to turn to federal-robbery to get his free medical care within the federal prison system. But he continues on and we talk on the phone, correspond by email and letters. He would really like to communicate with his daughter Kimberly, who wrote you - if you could share contact info with me I'll pass it on, or you could write to John directly. Sincerely, Brad Chilton, Ph.D., J.D., 3401 Brookshire Run, Corinth, TX 76210-4170, bradchilton@bellsouth.net, 940-498-2246

Thanks for getting in touch, Brad. I'll call you directly. Tracey

I'm Kim's half-sister and just stumbled across this. I'll get the address to her.

Hi Kim's half-sister - I have been in touch with John. Feel free to email me for information: maninhavana@yahoo.com. Tracey Eaton