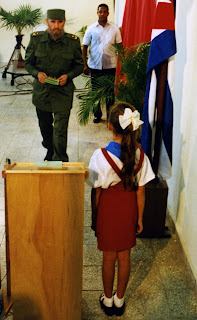 Here's something you don't see every day: Fidel Castro voting in a Cuban election 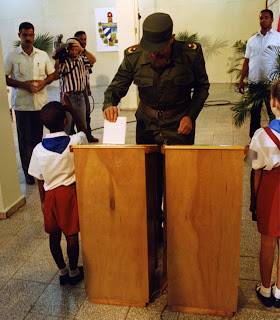 In this Jan. 11, 1998, election, Castro cast his ballot in the town of El Cobre on the island's southeastern edge. He told reporters:

We're free. We're independent.  And we fight for our independence - today, yesterday and always. 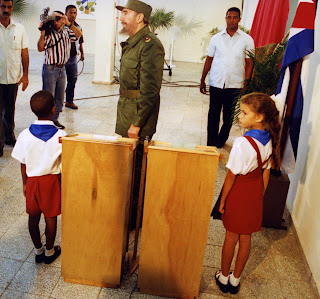 After the vote
Critics say Cuba's national elections mean nothing because there are no opposition candidates. Castro loyalists say Cuba has its own style of democracy based largely on the grassroots selection of local government leaders. 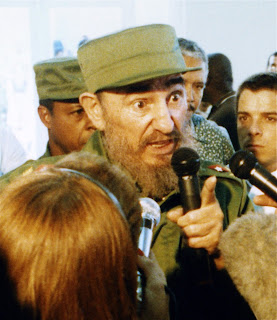 Castro fielded questions for more than an hour after voting in 1998. Isn't that Felipe Perez Roque to the right? 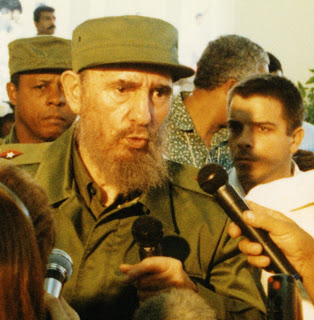 Ever defiant
Castro rejected democracy imposed on Cuba by foreign nations. And he issued a warning to those who are trying to topple or weaken the socialist government:

Nothing can stop us. Not even death, because those who try to wipe us out will have to die, too. 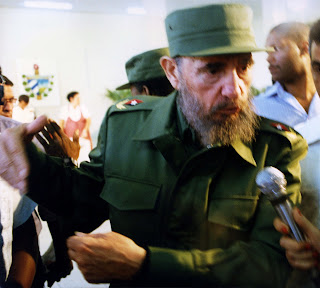 Explaining with words - and with his hands
Around the time of the 1998 elections, Fidel Castro sat down with two or three Cuban journalists. It wasn't exactly a press conference because the journalists asked very few questions. The president spoke most of the time and the journalists listened.
I was in Havana, staying at the Hotel Victoria. I listened to Castro for a while and then decided to go out. Several hours later, I returned. Castro was still on TV. I asked:

I watched a while longer. The journalists were still pretty quiet. But at one point, one of them spoke up, asking if he could ask a question. I remember Castro saying something like:

Yes, as long as you ask a question about exactly what I am talking about at this precise moment.

The show went on for four or five hours, maybe more.
One of the reporters' last questions was about the elections. By then, it was well after midnight and Castro said, "I wish you'd asked me about that when I was fresh." Then he proceeded to talk for another hour.
It was quite a performance. At least that's the way I remember it. There must be a transcript somewhere.
Link:
Elections in Cuba - Wikipedia
Jan. 12, 1998, story in the Dallas Morning News
Results of the last Cuban elections in May 2009
Posted by alongthemalecon at 2:05:00 PM

Now when you post Fidel pictures, I have to enlarge them to look at the quality khaki . . .

I wonder how many khaki outfits he has, how much they cost and who makes them. That would make for an interesting post...