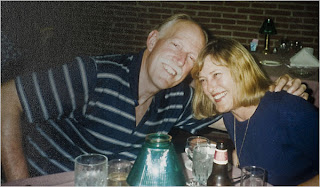 A 1997 photo of the happy couple.
Source: The New York Times
The New York Times on Thursday quoted family members who are still reeling over the espionage accusations against Kendall Myers, 72, and his wife, Gwen, 71. Gwen Myers’ daughter, Jill Liebler, 52, said:

When the FBI came to the door and told me my mother had been arrested, I kept thinking they must have the wrong house.

Another daughter, Amanda Myers Klein, 40, told the New York Times of the Myers' love for one another.

I have yet to meet a couple who are more in love than the two of them. They are beautiful together.

Kendall Myers' son, Michael, rejected some news organizations' portrayal of his father as a fanatic.

The media has painted a picture of him as a loner, a zealot, a man with an agenda. That’s not who he is.

Also Thursday, authorities filed a court document asking Kendall Myers to promise never to reveal classified information that comes out during the trial unless the court or the government authorizes disclosure - fat chance of that.
The document reads, in part:

I agree that I shall never divulge, publish or reveal, either by word, conduct or any other means, such classified information and documents unless specifically authorized to do so in writing by an authorized representative of the United States government, or as required by the Classified Information Procedures Act, or as otherwise ordered by this Court.

I understand that this agreement and any other non-disclosure agreement will remain binding upon me after the conclusion of trial in United States v. Walter Kendall Myers, Criminal No. 09-150, and any subsequent related proceedings including the appellate process.

Link: Along the Malecon's Spy vs. spy page
Posted by alongthemalecon at 2:27:00 PM