Cuban Five fighting to get out of prison 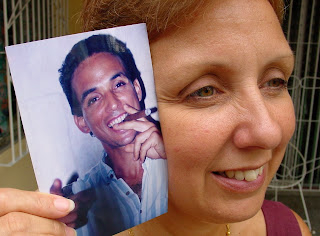 Maruchy Guerrero, sister of convicted Cuban agent Antonio Guerrero
The publicity machine to free the Cuban Five "has shifted into overdrive," the Miami Herald reported the other day.

The Cuban agents, in prison for more than a decade, are waiting to see if the U.S. Supreme Court will hear their case. The Herald said:

Ten Nobel Prize-winners, including German author Gunter Grass and Guatemalan peace activist Rigoberta Menchú, have joined supporters in filing ''friends of the court'' briefs seeking to overturn the 2001 convictions of the Cuban men.

Websites, billboards, TV interviews and the Cuban newspaper Granma portray the five as ''heroes'' and their incarceration as an ``injustice.''

This is a signal case in the international community regarding our nation’s commitment to the principle of due process. The petition seeks review of an en banc ruling upholding the only U.S. trial ever condemned by the U.N. Human Rights Commission.

The lawyers say that the federal government "ignores completely" friends of the court briefs filed by "domestic legal organizations, scholars of the Cuban community, ten Nobel Laureates, foreign parliaments and hundreds of individual legislators...and experts in the American jury process...

These briefs are "apparently more than have ever before been submitted in a criminal case," the lawyers say.
I wonder if the uproar over the Myers spy case will somehow affect the Cuban Five's prospects before the Supreme Court.