Debate over Cuba's membership in OAS heats up 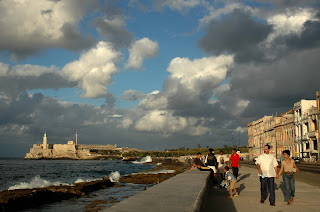 Along the Malecon
In 1962, the United States promised to build new airport in Port-au-Prince in exchange for Haiti's vote to suspend Cuba's membership in the Organization of American States in 1962. Said the Council on Hemispheric Affairs:

Haiti was thus won over to provide the last of the necessary 14 votes to suspend Cuba from the organization.

The wishful thinking argument holds that welcoming Cuba back into the fold will open a new space for dialogue. However, the Castro brothers have left little doubt of what they think of the OAS. In April, Fidel Castro condemned the OAS as "the hateful tool of the superpower," and dismissed its principles and aspirations as "delirious dreams." His brother Raul has said the institution should disappear.

The State Department suggests that the OAS study how Cuba's membership could be reinstated, then report back in a year.
Interestingly, Cuba says it doesn't want to be a part of the OAS, particularly if member nations are going to meddle in the country's internal affairs. Fidel Castro wrote last month:

...if we were expelled from the OAS for proclaiming our convictions and we are not members of that institution, what right do they have to pass judgment on us? Would the OAS do likewise with the Peoples’ Republic of China, Vietnam or other countries...?

Sarah Stephens, director of the Center for Democracy in the Americas, rejects preconditions on Cuba's membership in the OAS. She told the Herald:

Does OAS membership require a perfect record on all points included in the Charter? If there are membership requirements, they should be applied evenly to all nations. Cuba shouldn't be held to a different standard.

Link:
The Havana Note - Countering the spin about OAS membership
Posted by alongthemalecon at 8:15:00 PM