The Myers' address: The Westchester, 3900 Cathedral
Ave. NW, Apt. 610-A, Washington, D.C.
Photo credit: WestchesterWeb
In June and August 2008, the FBI secretly searched Kendall and Gwen Myers' apartment, a storage area in the basement of their luxury apartment building, their car, their sailboat and a marine storage locker, a 19-page detention memo shows.

The "non-invasive court-authorized" searches turned up: 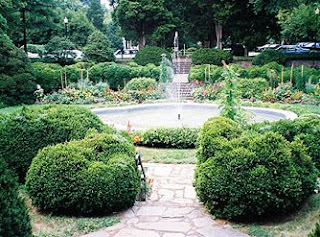 A fountain at The Westchester, often listed as one of D.C.'s "Best Addresses"
During the searches, agents say they also recovered "two e-mails from the defendants’ home e-mail account between the defendants and a sender located in Mexico, whose cover name is “Peter Herrera.” The detention memo said:

On December 22, 2008, “Peter” e-mailed the defendants, purporting to be an art dealer, and asked them to tell him when they will be “ready to pick [] up” some art pieces. Defendants responded to Peter on December 29, 2008, explaining that they were “[d]elighted to hear from [him] and to learn that [his] art gallery is still open” for them. They explained they had not made travel plans but would write to him as soon as they had.

On March 16, 2009, “Peter” sent the defendants another e-mail, asking them to notify him when they were ready to “pick up” the art pieces. The defendants responded to “Peter” on March 27, 2009, writing that their schedules did not allow for a visit to Mexico at the time, but asking “Peter” to keep them informed of his future shows.

In April 2009, an undercover FBI agent posing as a Cuban intelligence officer contacted the Myers.

Agents made audio and video recordings of the suspects' meetings with the undercover agent.
Link:
Along the Malecon's Spy vs. spy page
Posted by alongthemalecon at 3:42:00 PM