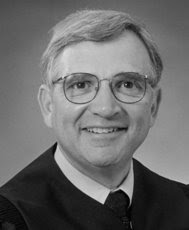 To put it bluntly, the government’s case seems at this point insuperable. The investigation culminates in the remarkable meetings that took place in April 2009 in which the defendants, thinking that they were speaking to a Cuban intelligence officer, spoke warmly and proudly of their history of spying for the Cuban government for most of their adult lives, complete with passwords, “drops,” code names and the use of a shortwave radio.

...the FBI has independently corroborated much of what the defendants told the undercover officers during those meetings...Surely, the government’s case at this point is very strong.

The strength of the case is one reason the Myers should remain in jail without bond, the judge said. He wrote:

Facciola cited two other reasons why he denied bond:

1) The defendants' age. Kendall Myers is 72 and Gwendolyn, 71. They face up to 35 years in prison. Sentencing guidelines call for 14 to 17 years. The judge wrote:

These defendants have already retired...If convicted, they face incarceration for what may very well be the rest of their lives. That fate provides a most compelling motivation to flee and avoid it at all costs.

2) The possibility that Cuba might help the Myers escape. The judge wrote:

Speaking less altruistically, Cuba has an equally powerful motive to prevent defendants from ever being tempted to cooperate with the United States and expose other agents or how Cuba manages and supports them. There is not a single imaginable reason why Cuba would want the defendants to remain in the United States subject to prosecution.

Fidel Castro has disavowed any knowledge of the accused agents, who told an undercover FBI agent that they met the Cuban president for four hours in January 1995.

Facciola said the couple own a 37-foot yacht located near Annapolis, have navigational charts for Cuban waters and have experience at sea. He wrote:

...Kendall Myers’ personal calendar indicates that he planned to sail to the Caribbean this fall with no return date indicated. That defendants already had made plans to escape indicates how profound the risk of flight is.

I could subject them to electronic surveillance but I have no assurance that the device will signal the authorities in sufficient time to apprehend them before they take the 10 minute cab ride to the Cuban Interests Section. The only alternative would be to effectively turn their home into a prison by having either the FBI or the Marshals Service move into their home and subject them to 24 hour personal surveillance for as long as it takes to complete this case.

I have therefore concluded that there are no reasonable conditions that I could set that would assure that these defendant will appear and I order them detained pending trial.

Link:
Along the Malecon's Spy vs. spy page
Posted by alongthemalecon at 3:07:00 PM