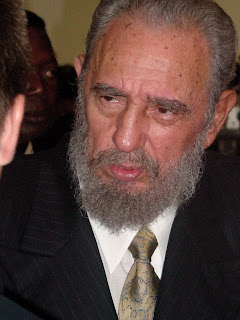 Fidel Castro talks to American business people at a Havana trade show
Fidel Castro said he can't recall meeting with accused spies Kendall Myers and his wife Gwen in 1995.
In a June 6 column, Castro said he met with thousands of Americans individually and in groups during that time and can "hardly recall details of a meeting with two people."
Castro didn't confirm or deny that the Myers spied for Cuba, but was dismissive of the case. He asked:

For my part I can assure you that as a matter of principle, we have never tortured anyone nor have we paid to obtain any information. Those who in one way or another helped to protect the lives of Cuban citizens against terrorist plans and projects to assassinate their leaders...did so for reasons of their own conscience and deserve, I think, all the honors of the world.