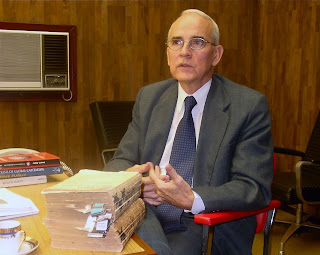 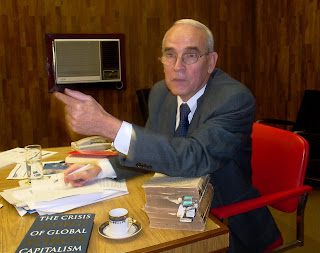 Soberón said he likes to re-read classics on economic theory
When I interviewed Soberón in September 2002, he said his government had no interest in selling off state-run enterprises, creating millionaires or adopting free-market reforms.

I can tell you that one of the most abused words in the last 10 years is 'reform.' I'd venture to guess that there are dozens, hundreds or thousands of people who use it, saying there haven't been enough reforms. And you ask them, 'Like what, for example?' And they don't know how to answer.

Some people want us to do the same thing they did in Russia. Open up the country, let's go, tell people to come and buy everything. I ask, 'Why?'

They always say the free market is more efficient than the state. Well, I'd say ... it's not the case that private companies are always more efficient. Things aren't black and white. 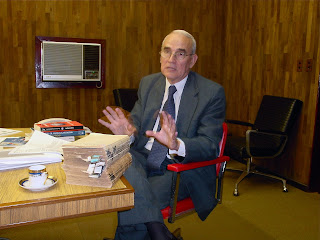 Stay away Ronald McDonald
I asked Soberón why the government doesn't lift the many restrictions on Cubans who want to operate their own businesses. Most private restaurant owners, for instance, aren't allowed to serve more than 12 customers at a time.
He told me Cuban officials don't allow bigger restaurants "because we don't want anyone to have a chain of McDonald's restaurants."

That's capitalism. That doesn't interest us, big capitalism in Cuba. We're not interested in Cubans becoming millionaires. That's where the conceptual difference is. We believe that unrestrained ambition in a human being brings society to its self-destruction. We're convinced of that.

Cuba does want to do business with American companies, he told me.

We have to reach out. This little island that you can barely see on the map isn't going to tell the world the way it should be. We have to connect ourselves to the world just as the world is.

I might catch a cold touching that telephone. Now imagine me wanting to enclose myself in a chamber with rubber gloves on so I'd never get sick. I'd die of loneliness.

Soberón impressed me as a dedicated, intelligent man in an impossible job. Cuaderno de Cuba says he is stepping down voluntarily and to dedicate his time to writing and researching issues in international finance.
Soberón also asked to be removed from the Communist Party's Central Committee, a government statement said.
Now that the central bank has a new chief, will any of Cuba's economic policies change?
Posted by alongthemalecon at 8:41:00 AM