Former colleague: Kendall Myers "seemed like an absent-minded professor," not a spy 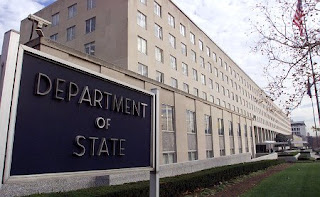 He seemed like an absent-minded professor with a scholarly view of the world rather than being involved in espionage. Kendall was anti-Bush but 90 percent of the people in this building are, too. He seemed to have a romantic view of the world and.
He was kind, he always helped people out and he had lots of friends. He was like a jovial character out of an English book, always having a fun sailing story.

The newspaper also quoted Baron Bew of Donegore, a member of the House of Lords who hosted Myers in Belfast. Dew said:

Kendall was open and pleasant and he asked questions. He had a certain W.A.S.P. [White Anglo Saxon Protestant] charm. He reminded me of J. K. Galbraith walking along the Backs at Cambridge – tall and slightly stooped. I liked him.

Links:
Along the Malecon's Spy vs. spy page
Excerpts of November 2006 Kendall Myer speech in Washington, D.C.
Posted by alongthemalecon at 6:09:00 AM