How popular is Generación Y in Cuba? (updated)

We all know that Generación Y has drawn international acclaim, but how popular is the site in Cuba?
I don't have any satisfying answers to that question. Alexa, a company that measures Web site popularity, has removed its page showing "Top Sites in Cuba."

(Note: Generación Y was back on the list as of Jan. 10, 2010).
I don't know if it's a technical glitch, routine maintenance or simply a decision not to rank Web sites in Cuba.
When I checked Alexa on May 9, it listed the 100 most popular sites in Cuba. The top 10 were:

It was surprising to see El Nuevo Herald at No. 8. I figured that site would be blocked. Seeing Facebook at No. 4 is also interesting. Cubans are getting into social networking big time. 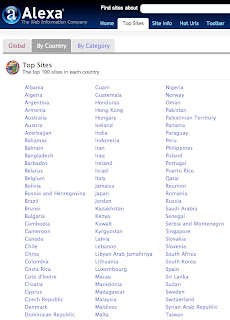 Alexa's country page
I've been exploring Alexa because I wondered how Generación Y stacked up against other sites in the Cuba. In May, neither Generación Y nor its domain - Desdecuba.com - made the Top 100 list. Cuba has since been removed from the Alexa page listing top sites by country.
Alexa does offer some analysis of the Desdecuba.com site. It says Desdecuba.com is the 415th most popular site in Cuba. A description of Alexa's methodology is here.
Alexa points out that its traffic numbers are based on toolbars that use Alexa data, "which may not be a representative sample of the global Internet population." So the numbers aren't perfect, but they provide some clues to Web site traffic patterns. 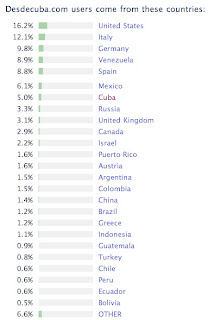 Alexa shows that 5 percent of the visitors to Desdecuba.com are from within Cuba 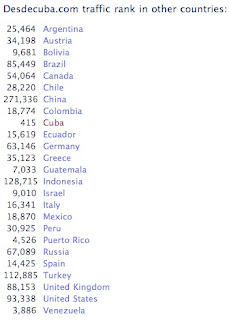 Desdecuba is ranked 415th. Does that make sense?

I have more questions than answers. For instance:

1. Is only Generación Y blocked in Cuba or the entire Desdecuba.com domain?

2. If Desdecuba is blocked, how can it be ranked 415th in Cuba? How can it get 5 percent of its traffic from within Cuba? Someone must be reading the domain's sites.

3. How many people in Cuba download the Alexa toolbars? And how does use of the toolbars - and lack of their use in Cuba - affect these numbers?

To try to better understand what the statistics mean, I compared Desdecuba to Granma, the official newspaper of Cuba's Communist Party. I found that Granma is ranked 165th in Cuba, according to Alexa. That puts it ahead of Desdecuba, at 415th. 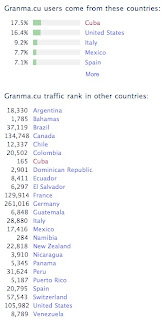 Granma's site traffic
Cuba was the country that visited Granma.cu most often, followed by the United States, Italy, Mexico and Spain.
The top countries visiting Desdecuba were the United States, Italy, Germany, Venezuela, Spain, Mexico and then Cuba.
It's clear that Yoani Sánchez has support in Germany, where Desdecuba.com is registered to a German named Josef Biechele. That has drawn criticism in Cuba, where some people regard Sánchez as a "cyber-dissident" financed from abroad.

The popularity of Desdecuba in Venezuela strikes me as a bit peculiar. What's going on there? Who are the visitors? Venezuelans interested in Cuba? Cubans working in Venezuela?
To be sure, the Alexa numbers aren't very satisfying. They don't give the full picture.
Technorati gave me a bit more information. It lists Generación Y as its 1,708th most popular blog, a formidable ranking. I couldn't find a Technorati listing for Granma.
What's certain is that Yoani Sánchez has fierce supporters, including Ernesto Hernández, editor of Penúltimos Días.
In 2008, Hernández accepted the Ortega and Gasset prize, one of Spain’s top journalism awards, on the blogger’s behalf. He told me:

I have defended her tooth and nail. I have done everything in my power to help her and promote her work. And I’ll continue to do so.

But some people remain suspicious of the blogger's rise. Jean-Guy Allard, a French-Canadian journalist living in Havana, contends that Sánchez is “just one more of those anti-Cuba products marketed worldwide." He told me:

She’s just one more of the funny characters of the U.S. propaganda market. …she could end up competing with Mickey Mouse. But, frankly, so what? She would certainly help her people more by spending her time and her mind on something else.

A senior Cuban official who spoke on condition of anonymity said Sánchez has a high profile now because she is fighting Cuba’s controversial Internet restrictions. He said:

She’s getting her 15 minutes of fame. I hope she enjoys it. But when there is wide-open access to the Internet, she’ll disappear.

As Ernesto Hernandez of Penultimos Dias points out in his comments, this graph from Google Trends shows that Internet users in April 2008 searched for Yoani Sanchez more often than they did Raul Castro.

Searches for Fidel Castro heavily outnumbered searches for Yoani Sanchez. That's something I'd expect. Fidel Castro has always taken a much higher profile than Raul.
Link:
Desarraigos Provocados: Yoani Sánchez unable to go to Germany to receive award
Posted by alongthemalecon at 6:00:00 PM

Desde Cuba, entirely, is blocked in Cuba for most of common Internet users. But not for all connections (Centro Internacional de Prensa or satellite connections, for example, are some exceptions).

Even if Alexa is much better today than a year ago, Alexa data by country are not reliable. (You can check easily some others complaints about this problem in teh Net).

Finally, there is a confusion, I think, between 15 minutes and two years. That's a matter of facts, no personal opinion. I sent you some interesting Google Trends data using a hugue search volume and showing that in april 2008 Yoani Sanchez was more popular in Google than Raúl Castro.

Ernesto,
Thanks. I didn't realize you could view Desdecuba from the CPI. That must explain a lot of those hits.
I'm leery of Alexa, too, because of its reliability problems. But it's interesting to see what the data it produces.