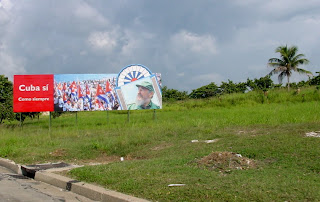 Accused spy worshipped the Cuban revolution
From Kendall Myers diary about a 1978 trip to Cuba:

Cuba is so exciting! I have become so bitter these past few months. Watching the evening news is a radicalizing experience. The abuses of our system, the lack of decent medical system, the oil companies and their undisguised indifference to public needs, the complacency about the poor, the utter inability of those who are oppressed to recognize their own condition...
Have the Cubans given up their personal freedom to get material security? Nothing I have seen yet suggests that...I can see nothing of value that has been lost by the revolution...the revolution has released enormous potential and liberated the Cuban spirit.
Everything one hears about Fidel suggests that he is a brilliant and charismatic leader. He exudes the sense of seriousness and purposefulness that gives the Cuban socialist system its unique character. The revolution is moral without being moralistic. Fidel has lifted the Cuban people out of the degrading and oppressive conditions which characterized pre-revolutionary Cuba. He has helped the Cubans to save their own souls. He is certainly one of the great political leaders of our time.

Kendall Myers says touring the Museum of the Revolution in Havana was a "sobering experience."

Facing step by step the historic interventions of the U.S. into Cuban affairs, including the systematic and regular murdering of revolutionary leaders left me with a lump in my throat...
They don't need to try very hard to make the point that we have been the exploiters.

Batista was only one of the long list of murderous figures that we thrust upon them in the name of stability and freedom.