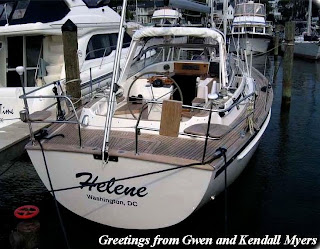 "We have the most beautiful boat!"
Prosecutors say Walter Kendall Myers and his wife Gwendolyn were "true believers" in Cuba's socialist government. I haven't seen any evidence that Cuban authorities paid them. But a photo of their boat is floating around on the Internet and some people will probably jump to the conclusion that their spying helped pay for it. Gwen wrote:

We have the most beautiful boat! We sailed the good ship Helene on the Bay for 4 hours. Kendall sailed then napped for an hour on a pad behind the helm’s seat. I used a finger to occasionally touch the wheel while the boat sailed herself. Clouds were esmerizing.

The boat's Swedish manufacturer, Malö, says its custom-built yachts are for "connoisseurs." A company brochure says:

At Malö Yachts, we know that you know boats and only want the best. That’s why we build our boats the way we do.

I wonder what one of those babies costs. 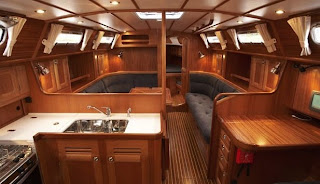 From the Malö Yachts brochure
The Cuba Blog says Kendall Myers and his wife told an undercover FBI agent that they hoped to “sail home” to Cuba one day on their yacht. But it looks like the U.S. government has sunk those plans.

Along the Malecon's Spy vs. spy page
Posted by alongthemalecon at 8:33:00 AM