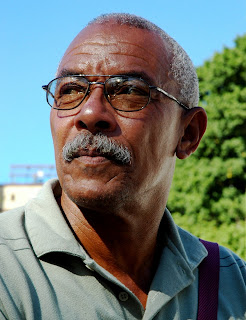 Charles Hill: "We were being persecuted."
American fugitive Charles Hill has lived more than half his life in Cuba, just beyond the reach of the FBI.
Hill, 59, is wanted in the murder of a New Mexico state police officer. He and two other members of a black separatist group called the Republic of New Afrika confronted the officer on Nov. 8, 1971, on a highway west of Albuquerque.
One of the three suspects shot officer Robert Rosenbloom in the neck with a .45-caliber handgun, killing him. The men hid out for nearly three weeks, then hijacked a plane and forced the pilot to fly to Cuba.
Nearly four decades later, Hill is the only surviving suspect, but if Rosenbloom's friends had their way, he'd get death penalty for his crimes. 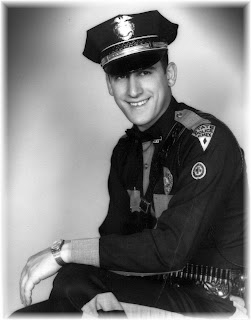 I would hope that Hill be sentenced to die if ever he returns to New Mexico to stand trial.
Robert was an outstanding man in all ways. I feel cheated that I only got to associate with him such a short time. It is certainly a time in my life I shall never forget.

Hill told me he'd would rather not talk about what happened that night in New Mexico. I interviewed him in Havana for an upcoming story.
He said many people forget what was going on in the United States in the late 1960s and early 1970s. Blacks were rising up against racial discrimination and hatred. It was a black rebellion, Hill said.
The Republic of New Afrika wanted to seize five states - Louisiana, Mississippi, Alabama, Georgia and South Carolina - and form a separate black nation. Members formed a provisional government and called for all blacks to decide what should become of America's black citizenry.
Hill and the other two militants had weapons in the trunk of their 1972 Ford Galaxie when Rosenbloom stopped them. 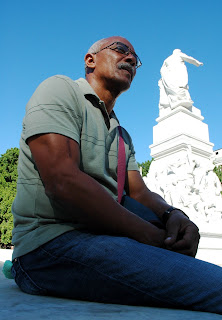 They went after us. If you had an Afro hairdo and got stopped by a cop, they went after you. We were being persecuted. There's no doubt about it.

Blacks were fighting a just cause back then, he added, yet today some people consider black separatists to be "domestic terrorists."

Hill arrived in Cuba speaking only high-school Spanish. Learning to live in the country was a difficult adjustment, he said.
But he learned the language, customs and culture. And now he has a Cuban wife, two children and a grandson. 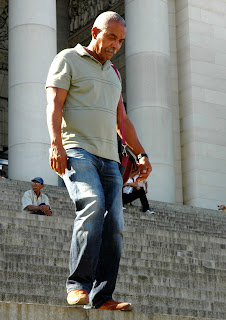 On the steps of El Capitolio
Hill said he has built a life that would be difficult to give up even if he could return to the United States and be forgiven for his crimes.

Basically, if I had an opportunity to go back to the States and be free on the streets and I couldn't come back to Cuba, that would be a tough choice. Right off the top of my head, I don't think I would leave my son and my daughter and my grandson here and not be able to come back to Cuba.

Health care is free in Cuba, he points out.

No, no, I wouldn't give it up, man. You know, I'm too old now. I don't have any retirement plan back in the United States.

It's not a perfect society. I'm not a perfect person. Nobody's perfect.
They've made some mistakes just like all governments have. But I've always felt they're constantly trying to work for the people.
See, this is the basic difference. I don't think the United States government works for the American people.

But the Cuban government "has always worked for the Cuban people." 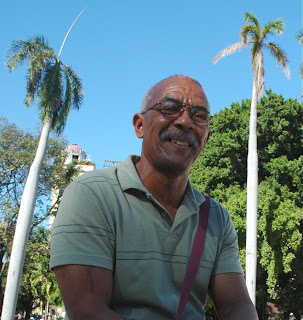 Hill says he's a different man
Asked if he's changed since the hijacking, he said he's gained "patience, understanding and tranquility."
He concedes he has very little money, but says he's in good health, has low blood pressure and thinks "that's pretty good."
And while he still has strong opinions, he said he's not angry anymore.

I'm not an old, bitter revolutionary. I'm not angry at anyone. I just keep on living. That's basically it. I take it as it comes.

Note to the blogosphere: I'll post the full story on Charles Hill once I finish it. Feel free to send me your comments for possible inclusion in the story. I've left messages with Bob Rosenbloom's family in New Mexico and haven't gotten any calls back. I think the family wants to be left alone. I certainly respect that.
I have some leads on some of Hill's relatives in the U.S., but haven't been able to connect with anyone yet.
If you know anyone involved in the case - from Charles Hill to Bob Rosenbloom - and you'd like to make a comment or pass along any information, please let me know. Thanks.
Links:
Robert Rosenbloom memorial Web site
Officer Down Memorial Page
Wikipedia entry for Republic of New Afrika
Posted by alongthemalecon at 8:52:00 PM

I visited the National Law Enforcement Memorial last week, I located Robert's name on the wall, and just sit there remembering the cold nights on the road blocks at the top of nine mile hill on I40, and thinking what a loss to the human race.
Mr. Hill needs to remain in Cuba living out his other life, I personally do not think he is welcome in the U.S.

pursuitdriver - thanks for your comment. I think Hill would be jailed right away if he returned to the U.S. and authorities realized he remains a wanted man.

Hill is correct that Cuba is a better place to live than the US. Not much has changed for black people in the US. Case in point: the cold blooded murder of Trayvon Martin by a racist. Hill should go to the website, axiomamnesia.com to see the state of affairs in the US.