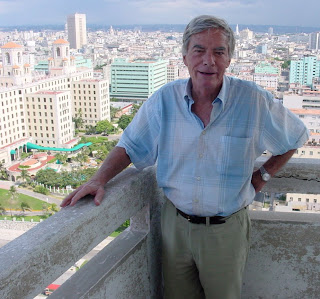 Philip Agee in September 2002. That's the Hotel Nacional to the left.
The Myers spy case got me thinking about others who have betrayed the U.S. government. Philip Agee blew the cover of hundreds of CIA agents before eventually taking refuge in Cuba. I interviewed him several times before his death in January 2008. He was a fascinating character and I always enjoyed talking to him.
In 2001, he told me:

It's not for the sake of adventure that I've done all these things. It's been for a political purpose.

Agee vehemently opposed U.S. policies in Latin America. He told me he thought our policies favored rich people and big companies, not the poor.
He is considered the CIA's only "ideological defector" since the agency's creation in 1947.
While in Havana, Agee created an online travel agency, Cubalinda.com, touted as the first independent American-owned business to operate on the island since Fidel Castro took power in 1959. He said:

There are those in the U.S. government who could make the case that what I'm doing is illegal. I don't think it's illegal. In fact, I think the American embargo is probably illegal.

If prosecuted in the U.S., Agee could have gotten 10 years in prison and a fine of up to $1 million for running the company. But he didn't seem to worried.
I asked former CIA Director Stansfield Turner what he thought about Agee. He told me that blowing the cover of CIA agents was akin to "cutting off the hands of a young surgeon." Turner said:

It was more difficult to put these trained CIA officers back on the street because everybody knew who they were.

I also spoke to a former CIA station chief about Agee. He talked about Agee's personal life, telling me Agee "never saw a skirt that didn't tempt him, and he only rarely withstood the temptation."
A CIA memo said Agee "had a consummate preoccupation with sex." 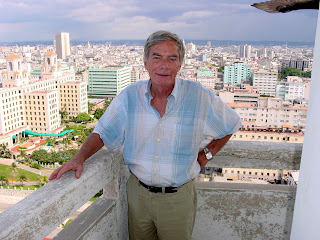 Until I dug this photo from my archives, I didn't notice the bird's wing
Links:
Along the Malecon's Spy vs. spy page
April 2001 story in the Dallas Morning News
January 2008 Philip Agee obituary in the New York Times
Posted by alongthemalecon at 3:46:00 PM

"According to the John Barron's book, "The KGB Today" (1983), Agee was forced to resign from the CIA after complaints of his heavy drinking, poor financial management and continuous attempts to proposition wives of American diplomats."

Podcast from the CI Centre - one of your best sources for intelligence and counterintelligence coverage.

The Death of a Traitor - the damage Agee did to his country by a symposium of experts.

Thanks for passing along that information. I read Inside the Company when I was in college, but didn't follow Agee's career after that. I found it interesting to read in 'The Death of a Traitor' that much of Agee's material in the book was fed to him by KGB agents and others.
The drinking and womanizing I had heard about.