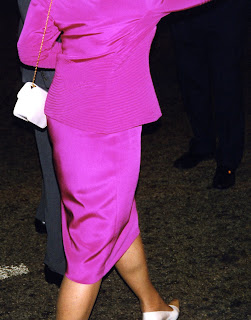 Her Majesty's rear end. At least it's in focus
In football, the Hail Mary Pass is legendary. Here's how Frank Van Riper once described it in the Washington Post:

It's a desperation play when you're behind, and the only thing you have going for you is chutzpah, hope and prayer. The clock is winding down – in fact there's only enough time on the clock for one play. All the receivers go deep; the quarterback hurls the ball toward the end zone and hopes – or prays – that one of them somehow will catch the thing.

When it works, it's beautiful. Ask Roger Staubach, who in 1975 ruined the Super Bowl hopes of the Minnesota Vikings with a Hail Mary touchdown pass to Drew Pearson to give the Dallas Cowboys the NFC division title.

"The photographic equivalent of the Hail Mary Pass," Van Riper wrote, is the "Hail Mary Shot." He wrote:

That's when the photographer holds the camera high over his or her head, sometimes to "see" over the heads and shoulders of a crowd, sometimes just for the hell of it, in hopes that the subject of the picture is, in fact, in the frame and recorded on film or pixels.

When it works, it's beautiful. But when it doesn't, you get results like the photo above. That is a picture of Queen Sofía's backside.
I was pointing the camera over a crowd of Cubans and missed the shot.
Queen Sofía of Spain and her husband, King Juan Carlos, visited Cuba in November 1999. I didn't cover the visit, but happened upon their entourage in Havana and snapped three quick pictures, none of them very good.
I learned that Hail Marys don't always work, no matter how much you pray - and especially if fail to get close and use a wide-angle lens. 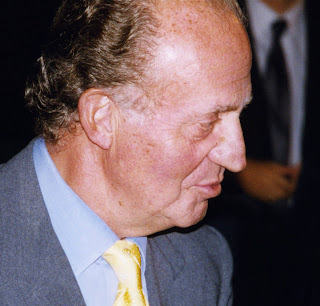 Here I chopped off the top of the king's head 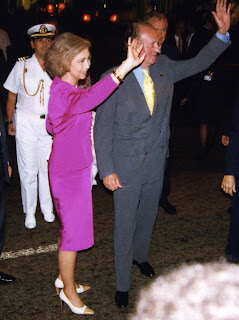 Here I manage to capture both royals as they waved to a crowd in Havana. Unfortunately, the frame also includes part of some guy's fat head

The picture below has all kinds of defects, but thanks to Mary, it worked out a little better. A Mexican police officer is choking a rowdy tourist in Tijuana. At least I captured some action without cutting too many vital body parts. 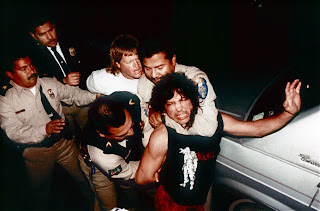 Notice the faint grin on the face of the cop who is choking the tourist
Link:
A Hail Mary Shot of Fidel Castro
Posted by alongthemalecon at 2:12:00 PM