Tough road ahead for Cuban Five 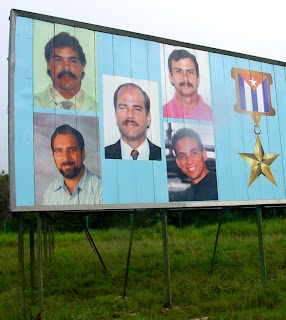 The Cuban Five are prisoners in the United States, but heroes in Cuba
The Supreme Court's refusal on Monday to hear the Cuban Five's case is a blow to the socialist government, which has made the agents' plight a cornerstone of its political agenda.
No doubt, the Cuban government will continue to use the case to rally nationalist sentiment. The government has held hundreds of marches and rallies in support of the agents over the years. Signs and billboards scattered across the island proclaim, "They will return!"
And two of the agents are scheduled to return to Cuba eventually, although surely not soon enough for the inmates or their loved ones.
Rene Gonzalez, serving a 15-year sentence, is set to be freed on Oct. 7, 2011, according to the Federal Inmate Locator.
So he has two years, three months and 21 days to go, not counting Oct. 7.
Gonzalez was arrested along with the four other Cuban agents on Sept. 12, 1988. They were convicted on June 8, 2001.
The next to be released would be Ruben Campa, also known as Fernando Gonzalez. The Inmate Locator lists his release date as April 1, 2015 - five years, nine months and 16 days away.
His original sentence was 19 years. 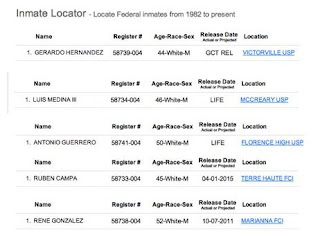 Release dates, inmate ages, inmate numbers and prison locations are shown above
The other three agents all received harsher sentences.
Luis Medina, also known as Ramon Labañino, got a sentence of life plus 18 years. And Antonio Guerrero received a sentence of life plus 10 years.
Inmate Locator doesn't list a release date for them - it just says "Life." 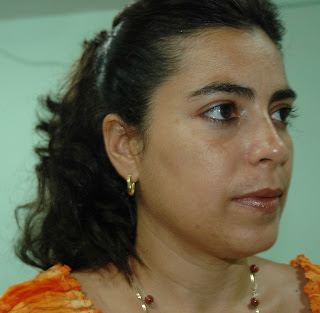 Adriana Perez, wife of Gerardo Hernandez
Gerardo Hernandez was slapped with a sentence of life plus 15 years. Next to his name is the abbreviation: GCT REL.
GCT is Good Conduct Time.
REL is Release.
But what does it mean? Is he eligible for release? Or is he just collecting good conduct time? I don't know and I haven't talked to anyone connected with the case lately.
Federal sentencing rules are complicated and looking for answers in an impersonal government database isn't the best way to find answers.
I thought a life sentence meant life in the federal prison system. According to Wikipedia:

Under the federal criminal code, however, with respect to offenses committed after December 1, 1987, parole has been abolished for all sentences handed down by the federal system, including life sentences, so a life sentence from a federal court will result in imprisonment for the life of the defendant, unless a pardon or reprieve is granted by the President.

At the same time, federal inmates serving life sentences can receive good conduct time, which can amount to as much as 54 days per year. According to the Code of Federal Regulations:

An inmate serving a life sentence may earn extra good time even though there is no mandatory release date from which to deduct the credit since the possibility exists that the sentence may be reduced or commuted to a definite term.

Does anyone have any additional information? Will the three agents serving life terms ever be freed? Do they have any legal options left? Or is a presidential pardon their only hope?
Links:
Proposed Good Time Bill to reduce federal prison overcrowding.
Along the Malecon's Spy vs. spy page
Posted by alongthemalecon at 4:16:00 PM