Tricking Fidel Castro's son was "sick" and "underhanded," one reader says. Was it illegal, too? 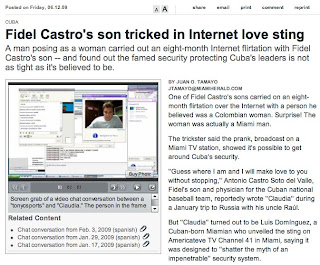 From the June 12 Miami Herald
A Miami man posing as a hot Colombian woman enticed Fidel Castro's son into an eight-month Internet relationship full of cyber-kisses, romance and messages of love.
Some anti-Castro activists got a kick out of the stunt. But I wonder: Did the trickster break the law?
Remember Lori Drew? In November 2008, she was convicted on three misdemeanor counts of unauthorized computer access. She helped a teen-age employee, Ashley Grills, create the fake MySpace profile of “Josh Evans.”
Josh was supposedly a cute 16-year old boy. Grills and Lori Drew’s daughter Sarah used Josh to lure 13-year old Megan Meier into an Internet relationship.
Megan took the bait. She fell for Josh. Then he told her the world would be better off without her.
Within an hour, Megan hanged herself.
Lori Drew is scheduled to be sentenced on July 2 in U.S. District Court in California. Her lawyers want probation. Prosecutors ask for a three-year jail term and a $5,000 fine.
In the Cuba case, Luis Domínguez said he created a fake profile to get close to Antonio Castro Soto del Valle. 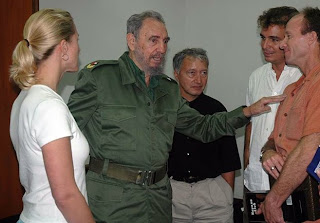 Antonio Castro, in the white shirt, listens to his father, Fidel Castro.
Photo credit: Secretos de Cuba
Domínguez told the Miami Herald he wanted to ''shatter the myth of an impenetrable'' security system surrounding the Castro family. He also complained about the privileges of Cuba's political elites, citing Antonio Castro's "unlimted access" to the Internet:

While everyday Cubans were banned from using the Internet cafes in Havana hotels, this guy had a BlackBerry and unlimited access to the Web.

The June 12 Herald said Domínguez, 46, is a security company employee who operates a Web site "featuring reports on Cuba's armed forces and security services -- Cubaaldescubierto.com."
Domínguez made up a character named Claudia Valencia, a 26- to 27-year-old brunette with blond highlights. The Herald described her as "a sports journalist who, like Antonio, follows soccer and technology."
Domínguez used Tagged, a social networking site, to make initial contact with Castro, then at some point the two began chatting via Yahoo! Messenger.
In creating the Claudia profile, did Domínguez violate the terms of service of either Yahoo! or Tagged?
Yahoo!'s terms state:

Members shall not misrepresent their identity or impersonate any person.

By impersonating Claudia, did Domínguez break the law? I doubt anyone would prosecute him, but I wonder if he violated any state or federal laws.

Drew's crime was unauthorized access to the MySpace servers - using fraud to access protected information. In a similar way, Domínguez evidently used stealth to access the servers of Tagged and Yahoo! 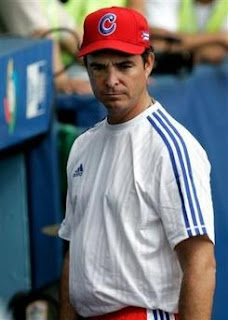 Fake profiles abound on the Internet. People create fictional characters all the time. But when does it - or should it - become a crime?
Last week, Texas lawmakers approved a bill that would make it a felony to impersonate someone online. The proposed law would ban the creation of phony social networking profiles aiming to "harm, defraud, intimidate, or threaten" others. The Texas governor must sign the bill for it to become law.
In California, U.S. Rep. Linda Sánchez, D-Calif., has proposed the Megan Meier Cyberbullying Prevention Act, which would make it easier to prosecute such cases.

Some critics say her proposal is too vague and could infringe on free speech. What's clear is that the courts are still grappling with out to handle legal issues surrounding social networking. 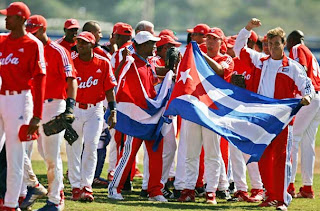 Antonio Castro holds up his fist after a 3-1 victory over the United States in the Pan American Games in July 2007. Source of Photo: Noticias 24
In May, the Ninth Circuit Court of Appeals ruled that an Oregon woman could sue Yahoo! Inc. "for failing to make good on a promise to remove a fake, lewd profile" posted by her disgruntled ex-boyfriend.
Cecilia Barnes filed a lawsuit in March 2005 to try to force Yahoo! to take down a profile that "contained nude photographs of Barnes and her boyfriend, taken without her knowledge, and some kind of open solicitation... to engage in sexual intercourse."
After that, she was bombarded with calls and visits from men who expected sex.
Antonio Castro hasn't made any public comments Claudia, the fake Colombian Internet girlfriend. But some Herald readers were outraged, seeing Castro as a victim, a surprising development in anti-Castro Miami. Among their comments:

* This is pathetic! - Medcom
* The Herald should be embarrassed to print this crap on page one. - Georgemia
* This is not worthy to even be reported. It was a sick, immature and underhanded thing to do. It is a disgrace. Aren't there better things to do with your time? - marianola
* This is trash journalism and only helps the regime in Cuba show how corrupt the Miami exiles really are. - peteracosta
* Pathetic and sad examples of what has become of the once powerful and resonant voice of the exile community. - Pa55ion 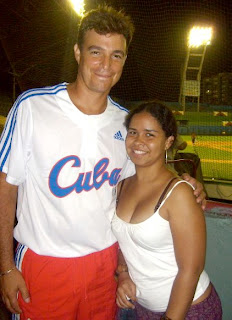 Antonio Castro with an admirer.
Source of photo: An Antonio Castro Facebook page
I have never met Antonio Castro and don't pretend to know what goes on among Cuba's political elites, but I'll recount a story I heard about him.
A Portugal diplomat told me that he went out with Antonio Castro and two of Fidel Castro's other sons one night. They went to the Habana Cafe nightclub at the Melia Cohiba Hotel to hear salsa star Issac Delgado.

But the doorman told them the club was full, and they turned to leave.
Suddenly, someone yelled, "Hey, it's the Portuguese ambassador!" and the doorman immediately let them in.
Incredibly, no one recognized the Castro sons. Nor did they try to use their father's name to get a table. I can't imagine that happening anywhere else in Latin America.
I'm sure Antonio Castro lives better than many Cubans. I'd expect that. But he shouldn't be punished for being the son of Fidel Castro.
Note: I added information about Tagged on June 14. The original post addressed only Yahoo!'s terms of service.
Posted by alongthemalecon at 10:52:00 AM