Sen. Mel Martinez, R-Fla., asked that the migration talks with Cuba be postponed until U.S. authorities determine the damage done in the Myers spy case. The Capitol Hill Cubans quoted a Martinez statement:

Today’s arrest of two Americans alleged to have spied for Cuba is reason enough for the Administration to halt any further diplomatic outreach to the regime including postponing the migration talks until the U.S. Congress has a full accounting of the damage these individuals have caused to our national security.

This is a stark reminder that just 90 miles from our shores, there is a government hostile toward the people of the United States, a regime that seeks to do us harm and works against our interests around the world.

I commend the Department of Justice and especially the FBI for their work. I hope the Obama administration will continue its efforts to uncover Cuban acts of espionage and increase actions to counter the regime’s clandestine assault against the U.S. -- an assault that has continued for more than half a century.

I agree the FBI should be commended for uncovering the flagrant stealing of American secrets. But the cloak of national security shouldn't be used to bring unnecessary delays to improving relations with Cuba. I don't think we need to suspend all diplomatic outreach to Cuba. 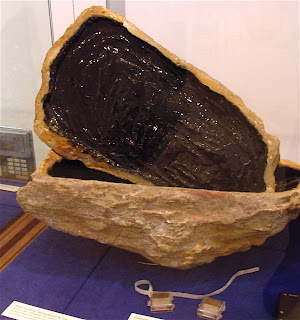 Hollowed-out rock that the CIA used to pass along money, messages and material to dissidents in Cuba

Our government is capable of doing more than one thing at a time. We can fight two wars at once. We should be able to assess the intelligence damage from the Myers case and talk to the Cubans at the same time.
I am not condoning Myers and his wife for what they have done. They are innocent until proven guilty, of course. But the indictment makes it clear to me they violated the trust of their government and should be punished. The case looks like a slam dunk.
But when deciding how to proceed on the diplomatic front, we should consider that much of Cuba's spying is defensive, not offensive. The Cuban government is trying to protect itself from attacks from our government and some hardline Cuban exiles intent on toppling the socialist government.
Along the Malecon's Spy vs. spy page
Posted by alongthemalecon at 6:51:00 AM

"much of Cuba's spying is defensive, not offensive"
I don't see it so clear.
Fidel decided to fight USA before the Sierra Maestra. Since then, the destruction of Capitalism and the American Way of life have been his permanent goal.
I agree that suspending diplomacy is at least unnecessary.

I was only wondering how many spies the U.S. government has working within Cuba.....any guesses?

I would expect nothing less from Mel Martinez....afterall, the far-right republican senator from Florida has always wanted to maintain the old, dysfunctional status-quo.

Larry,
Good question. I have no idea how many U.S. intelligence agents work in Cuba. I'd estimate there are two to four intelligence agents or analysts at the U.S. Interests Section. That is a wild guess.
A 2007 report said the Interests Section had a U.S. staff of 51.
This was the breakdown: Diplomatic and consular; 26 staffers; Marine security, 10; administrative support, seven; Diplomatic Security, four; Homeland Security, two; Coast Guard, one; and public diplomacy, one.
The U.S. government also sends officials to and from Cuba on temporary duty. Some of these could include intelligence agents.
Tracey