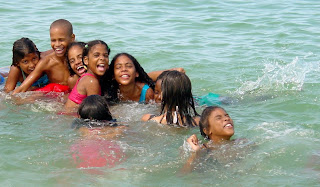 Scene from a beach east of Havana
As early as September, some experts say, Congress may vote on a proposal to allow American tourists to visit Cuba. Sarah Stephens of the Center for Democracy in the Americas said:

I think it's possible by September or October that congress will lift the travel ban for all Americans to Cuba. It will be very tough to get to that final ending of the embargo anytime soon. But I think that the lifting of the current travel ban is real. I think that can happen and part of the reason is that it is in Congress' hands and they want to do it.

Stephens made the comments in Kingston earlier this month at a conference on Caribbean Studies. Daniel Erikson of the Inter-American Dialogue also spoke. The Jamaica Observer quoted him as saying:

I think that the lifting of the travel ban is exactly right. The debate in the U.S. today is about lifting the ban on ability of ordinary Americans to travel to Cuba and I see this as being the thread that if you pull it, it can unravel the whole sweater.

Most American tourists will stay Spanish and Canadian hotels and they'll get around on Chinese buses, Erikson said.

Only the food is American nothing else. This is going to get American business interested. And once you mobilize the U.S. business community then you start to get some real political weight behind change beyond the intellectual arguments being made. So I think what we need to watch for is the vote on the travel ban.