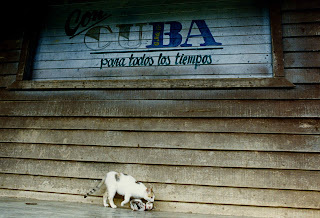 Cuba - For all Times
The Obama administration has done little to change U.S. policy toward Cuba, Raul Castro says, but Cuban officials are "ready to talk about everything" with the Americans "under equal conditions."

The Cuban president said in a June 17 speech that Cuba won't "negotiate our sovereignty nor our political and social system, and our right to self-determination and internal affairs."
As for the U.S. trade embargo, he said:

There is not political or moral pretext that justifies this policy. Cuba has not imposed any such sanction against the United States or its citizens.

Castro said the Obama administration's actions toward Cuba were "fine, positive but only achieve the minimum. The embargo remains intact."

U.S. Cuba policy is "a case of post-diplomatic stress disorder," according to Counterpunch, a political newsletter.
Robert Sandels and Nelson Valdés write that the solution to the Cuba problem should have been easy for the Obama administration: "Define the policy as a fossilized curiosity and drop it."

This could not be done, however, because the administration has not come to grips with the tectonic shifts in global power relations.

Valdés is a sociology professor at the University of New Mexico and director of the Cuba-L Project, a non-profit organization that distributes information about Cuba. Sandels writes for the project.

They say American officials have failed to realize that their hardline policies toward Cuba are out of step with most of the world - and the Obama administration has done little to change that.
The Obama administration's "willingness to resume the routine talks on immigration that Bush had unilaterally suspended" is not a groundbreaking move, they say.

Like his earlier reversal of Bush's restrictions on family travel to Cuba, Obama seemed to think the latest policy tweak was a policy change -- another U.S. volley keeping "the ball in Cuba's court."

Surely, for the U.S. to resume compliance with earlier understandings does not amount to a concession for which the other party now owes it something in return.