Wow.
Walter Kendall Myers had a Top Secret security clearance. He viewed or downloaded  200 "sensitive or classified intelligence reports" during the year before he quit the State Department in 2007, prosecutors say. The New York Daily News described these as the "crown jewels" on Cuba. 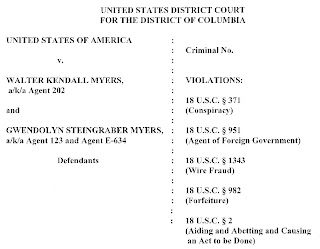 The 36-page Myers indictment is here and the full FBI press release is below:

“The clandestine activity alleged in the charging documents, which spanned nearly three decades, is incredibly serious and should serve as a warning to any others in the U.S. government who would betray America's trust by serving as illegal agents of a foreign government. We remain vigilant in protecting our nation's secrets and in bringing to justice those who compromise them,” said David Kris, Assistant Attorney General for National Security. “These arrests are the culmination of an outstanding counterespionage effort by many agents, analysts and prosecutors who deserve special thanks for their extraordinary work.”

“This case demonstrates the care we must take in protecting our nation’s valuable secrets, and shows the dedication and perseverance of the men and women investigating this crime who never tired in finding those now charged with betraying our country,” said Acting U.S. Attorney Channing D. Phillips.

“Intelligence services from around the globe continue to steal what information they can from the United States,” said Joseph Persichini, Jr., Assistant Director for the FBI's Washington Field Office. “Vigilance must be matched with patience to successfully bring their agents to trial. I would particularly like to thank the men and women in my office who worked on this case and who work on other espionage investigations. They work without accolades; silently protecting the safety and security of the United States and its citizens.”

Assistant Secretary of State for Diplomatic Security Eric J. Boswell stated, “The U.S. Department of State is jointly investigating this matter with the FBI, and will continue to aggressively pursue any and all breaches of national security. The Department’s Bureau of Diplomatic Security works closely with its law enforcement colleagues in the FBI and other agencies to uncover and prosecute any breath of security within its ranks. Any compromise of classified information is a serious threat to the security of our nation, and the State Department will aggressively investigate any such activity to the fullest extent possible.”

According to an affidavit in support of the criminal complaint, Kendall Myers began his work at the State Department in 1977, initially serving as a contract instructor at the Department’s Foreign Service Institute (FSI) in Arlington, Va. After living briefly in South Dakota, he returned to Washington, D.C., and resumed employment as an instructor with FSI. From 1988 to 1999, in addition to his FSI duties, he performed periodic work for the State Department’s Bureau of Intelligence and Research (INR).

Kendall Myers later began working full-time at the INR and, from July 2001 until his retirement in October 2007, he was a senior analyst for Europe for INR, where he specialized in intelligence analysis on European matters and had daily access to classified information through computer databases and otherwise. He received a Top Secret security clearance in 1985 and, in 1999, his clearance was upgraded to Top Secret/SCI.

Gwendolyn Myers moved to Washington, D.C., in 1980 and married Kendall Myers in May 1982. She later obtained employment with a local bank as an administrative analyst and later as a special assistant. Gwendolyn Myers was never granted a security clearance by the U.S. government.

According to the affidavit, Kendall Myers traveled to Cuba in December 1978 after receiving an invitation from an official who served at the Cuban Mission to the United States in New York City. His guide while in Cuba was an official with Cuba’s Foreign Service Institute. This trip provided the Cuban Intelligence Service (CuIS) with the opportunity to assess or develop Myers as a Cuban agent, according to the affidavit.

Approximately six months after the trip, the Myers were visited in South Dakota by the official from the Cuban Mission in New York and, according to the affidavit, Kendall and Gwendolyn Myers agreed to serve as clandestine agents of the Cuban government. Afterwards, the CuIS directed Kendall Myers to pursue a job at either the State Department or the CIA. Kendall Myers, accompanied by his wife, then returned to Washington, D.C., where he resumed contract work at the State Department and later obtained a State Department position that required a Top Secret security clearance.

According to the affidavit, during this time frame, the CuIS often communicated with its clandestine agents in the United States by broadcasting encrypted radio messages from Cuba on shortwave radio frequencies. Clandestine agents in the United States monitoring the frequency on shortwave radio could decode the messages using a decryption program provided by the CuIS. Such methods were employed by defendants previously convicted of espionage on behalf of Cuba. According to the affidavit, the Myers have an operable shortwave radio in their apartment and they told an FBI source that they have used it to receive messages from the CuIS.

According to the affidavit, in April 2009, the FBI launched an undercover operation to convince the couple that they had been contacted by a Cuban intelligence officer and to ascertain the scope of their activities for the CuIS. On April 15, 2009, an undercover FBI source posing as a Cuban intelligence officer approached Kendall Myers in Washington, D.C., stating that he had been sent to contact Myers by a named CuIS official in order to obtain information. The FBI source also congratulated Kendall Myers on his birthday and offered him a cigar. Myers agreed to meet the source later that day at a nearby hotel and volunteered to bring his wife along to the meeting.

During the meeting later that day, the couple agreed to meet the source again and to provide information on U.S. government personnel with responsibility for Latin America. According to the affidavit, the couple also made a series of statements about their past activities on behalf of the CuIS, including acknowledging having received coded messages from the CuIS via shortwave radio, meeting CuIS officials in Mexico, and being alert to surveillance. “We have been very cautious, careful with our moves and, uh, trying to be alert to any surveillance,” Kendall Myers allegedly told the FBI source.

In subsequent meetings with the FBI source, the Myers allegedly agreed to provide information on the April 17-19, 2009 Summit of the Americas in Trinidad and Tobago, as well as to use specified code words, signals and encryption programs to transmit information via email during future interactions with the source. They also asked the source to “send special greetings…and hugs” to certain CuIS officials.

In addition, the couple allegedly made further statements to the source about their past activities for the CuIS. According to the affidavit, the defendants discussed how they were first recruited by the CuIS and how codes had been used for each of them in messages, including “123” for Gwendolyn Myers and “202” for Kendall Myers. The Myers also stated that they had traveled to meet Cuban agents in Mexico, Trinidad and Tobago, Argentina, Brazil, Ecuador, Jamaica, New York City and other locations.

According to the affidavit, Kendall Myers told the source that he typically removed information from the State Department by memory or by taking notes, although he did occasionally take some documents home. “I was always pretty careful. I, I didn’t usually take documents out,” he said. According to the affidavit, he also acknowledged delivering information to the CuIS that was classified beyond the “Secret” level. He further stated that he had received “lots of medals” from the Cuban government and that he and his wife had met and spent an evening with Fidel Castro in 1995.

According to the affidavit, the FBI collects high frequency messages broadcast by the CuIS to its agents and has identified messages that it has determined were broadcast to a handler of Kendall and Gwendolyn Myers. Furthermore, the FBI has confirmed trips by the couple to Mexico, Trinidad and Tobago, Argentina, Brazil, Ecuador and Jamaica that correspond to statements made by the defendants. In addition, the FBI has identified emails to the couple in 2008 and 2009 from a suspected representative of the CuIS in Mexico who was allegedly requesting that the couple travel to Mexico.

The affidavit further indicates that an analysis of Kendall Myers’ classified State Department work computer hard drive revealed that, from August 22, 2006, until his retirement on Oct. 31, 2007, he viewed more than 200 sensitive or classified intelligence reports concerning the subject of Cuba, while employed as an INR senior analyst for Europe. Of these reports concerning Cuba, the majority was classified and marked Secret or Top Secret, the affidavit alleges. An FBI review of Kendall Myers’ State Department security files further revealed numerous false statements by him to conceal the couple’s clandestine activities on behalf of the CuIS, the affidavit further alleges.

According to the affidavit, neither Kendall Myers nor Gwendolyn Myers ever provided notification to the Attorney General that either of them was acting as an agent of a foreign government, as required by law.

This investigation was conducted jointly by the FBI’s Washington Field Office, and the State Department’s Bureau of Diplomatic Security. The prosecution is being handled by Assistant U.S. Attorney Michael Harvey, from the U.S. Attorney’s Office for the District of Columbia, and Senior Trial Attorney Clifford I. Rones, from the Counterespionage Section of the Justice Department’s National Security Division.

The public is reminded that criminal complaints and indictments contain mere allegations and are not evidence of guilt. A defendant is presumed innocent unless and until proven guilty.
Along the Malecon's Spy vs. spy page
Posted by alongthemalecon at 8:09:00 PM