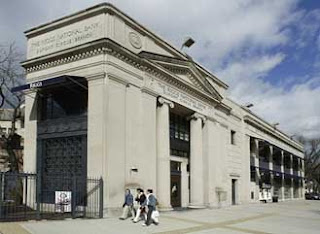 Photo credit: Washington Post
Accused spy Gwendolyn Myers may have sought a job at Riggs Bank in Washington so she could snoop around for CIA connections and other nuggets of information, Capitol Hill Cubans says. The blog says:

It's barely a secret that a connection between the CIA and Riggs Bank goes back to at least the early 1960s. Back in 1977, Washington Post journalist Bob Woodward first tied Riggs Bank to payments in a CIA operation in Iran.

By 2004, the Wall Street Journal would corroborate that Riggs Bank "had a longstanding relationship with the Central Intelligence Agency, according to people familiar with Riggs operations and US government officials," and that the relationship included top Riggs executives receiving US government security clearances.

Coincidence or an information-rich environment for Gwendolyn?

Riggs Bank has had some legal trouble. On May 14, 2004, the USA Today ran an AP story saying that federal regulators had fined Riggs Bank a record $25 million "for allegedly violating anti-money laundering laws in its handling of tens of millions in cash transactions in Saudi-controlled accounts under investigation for possible links to terrorism financing."

The story described the Washington bank as having "a near-exclusive franchise on business with the capital's diplomatic community."