U.S. embargo: "The only 50-year-old prescription in the world" 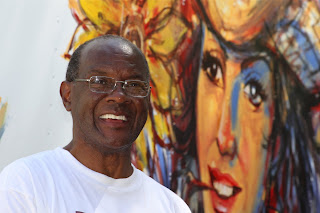 Alberto Jones
A 70-year-old Florida activist who led an effort to collect at least seven tons of humanitarian aid for Cuba said he doesn't worry about going to jail.
"I know I'm breaking the law," Alberto Jones said. "But I'm not afraid."

Jones and others who oppose the U.S. ban on trade with Cuba worked this week to load two trucks and one trailer with medical equipment, old computers and school supplies. They plan to send it to Cuba despite U.S. restrictions on trade with the socialist nation.
The trucks will join a caravan of buses and trucks that will journey to South Texas later this month, cross the U.S.-Mexico border, then travel to the port city of Tampico, Mexico. From there, if all goes well, the aid will be loaded on a boat bound for Cuba.

Pastors for Peace has organized the caravans every year since 1989. The group refuses to request the required U.S. government licenses authorizing such shipments to show its opposition to longtime economic sanctions against Cuba.

Some of those helping to pack the Florida aid into boxes at a New Smyrna Beach warehouse asked to remain anonymous. "This is illegal," one woman explained.

Opposition to the U.S. government's Cuba policy has grown in recent years, Jones said. Still, some people don't want to be associated with the Pastors for Peace caravan.

"Your business can be ruined, especially in South Florida, if it is labeled as one that supports the Cuban regime," Jones said. 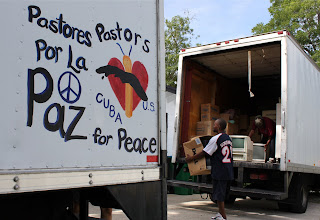 Jones has helped collect aid for Pastors for Peace caravans for 12 years. He said some foes of the socialist regime consider him "an agent of Castro." But he does not let that stop him.

"I do not allow people to label me," he said.

He said he spent 12 years in the United States before returning to Cuba in 1992. He visited a cardiology center for children in Cuba and was troubled by the lack of medical equipment and supplies.

So he decided to try to help and in 1996 he founded a non-profit organization called the Caribbean American Children Foundation.

He said he opposes U.S. sanctions against Cuba because they hurt ordinary Cubans and because they are out of step with American policies elsewhere.

"Some people may hate Castro to death, but even they will admit certain facts. Cuba has not been at war with the United States. Vietnam has. But we trade with Vietnam and not Cuba," he said.

Jones, who ran a medical waste disposal business called Ortho for 20 years, described U.S. policy toward Cuba as "a disaster."

"When you are not feeling well, you go to the doctor. He gives you a prescription. If you're not better, your doctor switches the prescription until you say, 'I'm well. I'm feeling fine.'"

U.S. officials ought to take the same approach toward their Cuba policies, he said. But instead, they've stuck with the same strategy for decades.

"It's the only 50-year-old prescription in the world," he said. "It's stupidity that hurts both the U.S. and Cuba."

"There's no winner in this absurd game."
Supporters of U.S. policy say they don't want to loosen the embargo unless Cuba releases political prisoners and takes steps toward democratic elections.
Posted by alongthemalecon at 12:22:00 PM