Juanita Castro promises to tell all in new book 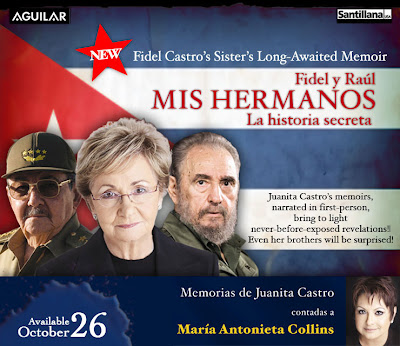 My Brothers
Fidel Castro's sister, Juanita, has written a book about her famous brothers. It's scheduled to be out on Oct. 26 and will be published by Santillana USA.
The Associated Press says that journalist Maria Antoineta Collins co-wrote the book. The AP said Juanita Castro left Cuba in 1964 and settled in Miami.

...she has kept a low profile and for years could be found behind the counter of the small pharmacy she owned. She retired in 2007.
According to a Santillana news release, Castro dictated the story to Collins a decade ago but refused to publish until now.

That's intriguing. We'll see what she says.
Posted by alongthemalecon at 11:17:00 PM