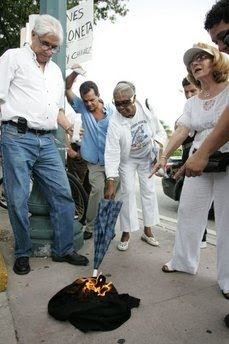 Members of Vigilia Mambisa burn a t-shirt to protest the Juanes concert. Photo credit: EFE
Cuban-American opinions on the Sept. 20 Juanes concert in Havana were sharply divided along generational lines, a new poll shows.
Older Cuban-Americans opposed the concert while many young people favored it, according to an August phone survey of 400 Cuban-Americans. 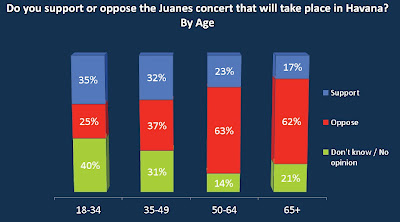 Miami-based Bendixen & Associates conducted the poll for the Cuba Study Group, a Washington, D.C., organization that favors "peaceful reunification of the Cuban nation leading to a free and open society with respect for human rights, the rule of law and a market-based economy." 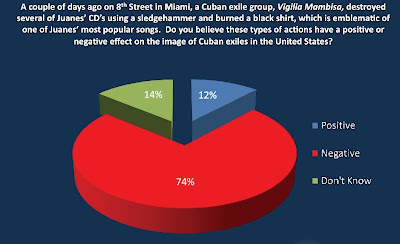 The pro-Juanes Cubans had the bigger flags. They also had the numbers.
And they had youth.
And in the end, they had Versailles Restaurant on Calle Ocho, long a
stronghold of hardline, right-wing politics in Miami.
When it was over, the aging Cuban exile population that arrived in
Miami in the early 1960s and established itself as one of the most
influential political forces in the history of Miami was pigeonholed
to a street corner across Versailles where they were surrounded on the
other three street corners by screaming, chanting and taunting Cubans
who fully supported Sunday’s Juanes concert in Havana.
All the aging exiles could do was destroy blank CDs that had been
scrawled with Juanes' name in magic marker to show their disgust for the
Colombian singer, who had performed for hundreds of thousands of Cubans
in Havana earlier that day.
Perhaps the CD-stomping gesture was meant to be symbolic.
“They have no voice anymore,” said Alfredo Martinez, a 29-year-old Cuban
immigrant who arrived in Miami during the early 1990s.
“This is our time now. We don’t believe in Castro but we believe in
Juanes. He did more for Cuba in one concert than they have done in 40
years.”