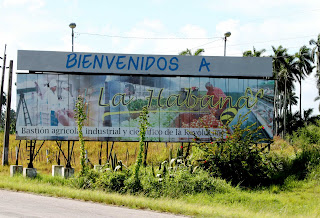 The billboard reads: Welcome to Havana. Agricultural, industrial and scientific bastion of the Revolution.

On April 13, 2009, President Barack Obama announced new rules aimed at making it easier for Cuban-Americans to travel to Cuba. The Office of Foreign Assets Control, an arm of the Treasury Department, finally implemented those rules today.
Explaining the delay, the White House said the rules were "not simple to write," and those who were drafted them had other responsibilities, the Miami Herald said.
People who want the U.S. government to take more dramatic steps to normalize relations with Cuba aren't satisfied.
Anya Landau French writes in the Havana Note:

As far as signals - or gestures - go, I think this signals that, on Cuba, this Administration responds to action-forcing events. That, and that it does know how to keep a promise on Cuba. For that the Administration should be commended.
Lifting family travel and remittance restrictions is indisputably a humanitarian measure. But this move was more a gesture to Little Havana, not Havana.

...It's tough to imagine that an ethnically-based travel policy ... can stand up long against challenges that it is unconstitutional... We simply don't know what the Administration may be planning next, but I can't imagine this thought hasn't crossed their minds. 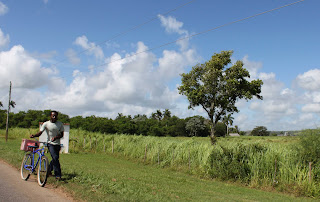 Cuban countryside
Robert Wenzel at the Economic Policy Journal says there are loopholes in the rules making it easy to violate the per diem limit of $179 per day. He writes:

Might conversations like this take place? "Hey Juan, I'm headed over to see you in Havana on the 9th.There is a limit as to how much I can carry myself, so I'm going to wire over some extra cash. Can you please pick this up for me at the bank?

Am I missing something here, or are these regs totally bogus?

Our Cuba travel policy is difficult to defend for a lot of reasons. We criticize Cuba for limiting its citizens ability to travel, then turn around and tell Americans they can't travel to the island. That's hypocritical.
Links:
OFAC's 46-page explanation of the new rules is here or here. Better yet, here's an OFAC fact sheet that's easier to read.
A new 17-page summary of OFAC's Cuba rules
Latin America Working Group's End the Travel Ban on Cuba page
Along the Malecon's U.S.-Cuba Relations page
Posted by alongthemalecon at 8:51:00 PM