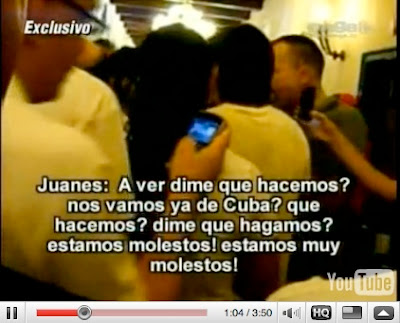 Juanes: "We're very upset!"
Colombian superstar Juanes and more than a dozen others, including Spanish singer Miguel Bose, Puerto Rican Olga Tañón, Cuban Silvio Rodríguez and the legendary group Los Van Van, performed on Sept. 20 before hundreds of thousand of people at the Plaza of the Revolution.
A new video clip raises the possibility that the concert was in danger of being cancelled just hours before it started. Juanes and some of other musicians are shown in the lobby of the Hotel Nacional. Juanes says: 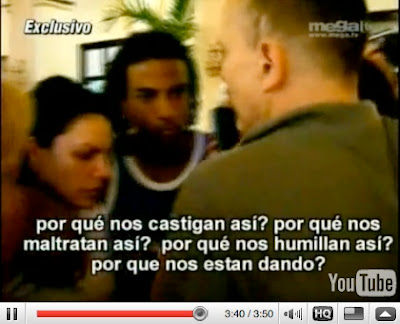 Here's the Miami Herald version of the events:

MIAMI -- During his historic concert in Havana, Colombian pop star Juanes was all smiles.
But hours before, he threatened to call off the event, angered over constant monitoring by Cuban handlers and rumors police were blocking people from the concert.
In an exchange recorded by journalists at the Hotel Nacional in Havana on Sunday morning, Juanes pointed to an individual apparently from Cuban state security.
"I just realized a little while ago that since yesterday, the guy who's bringing me breakfast, the guy who is accompanying me, then I see him in the concert, and now I see him sending messages," Juanes shouted.
Moments later, Juanes raised concerns that police were letting only certain individuals into the concert area and prohibiting those not wearing white shirts symbolizing peace. 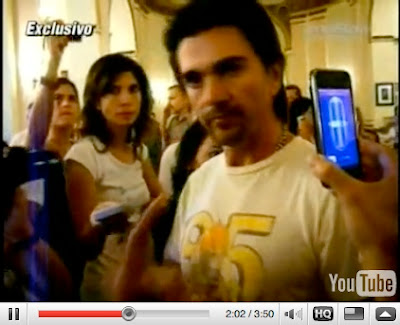 Juanes cried hours before the "Peace without Borders" concert.

"We can't permit that normal people aren't allowed in the show, that a person who has not brought a white shirt isn't allowed in," he told fellow performers Miguel Bose of Spain and Olga Tañón of Puerto Rico.
Eventually, Bose, his voice breaking, consoled a weeping Juanes, while Tañón tried to convince both men to go on with the concert for the sake of the Cuban people.
Cuban officials had no immediate comment regarding the incident.

I'm interested in hearing Cuban officials' take on the video. I read somewhere some speculation that Cuban handlers shadowed Juanes at least in part because they wanted to protect him. In the weeks before the concert, he evidently got death threats from anti-Castro activists in the United States.
Fidel Castro called it an "extraordinary concert." Young people in Cuba showed that "even in the midst of a brutal economic blockade unimaginable obstacles can be overcome," he wrote in a column that focused mainly on global environmental problems.
Link:
An article with more detail about the controversy over the video is here, in Spanish.
Posted by alongthemalecon at 10:35:00 PM

Life isn't fair always, but al least, Juanes has tried to change many mistakes that we are used to do... We need to behave as if we were in a brotherhood, cuz after all, we are! but we haven't realized it yet... Such a shame