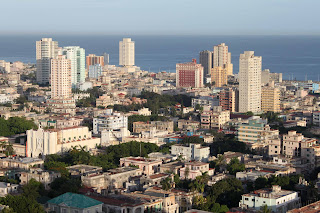 Havana, 2009
Democrats go to Cuba more often than Republicans - and they spend more money.
Members of Congress and their staffers made 277 trips to the island from January 2000 to August 2009, spending $487,282, according to LegiStorm, a Web site that tracks congressional salaries and other information.
Democrats took 180 Cuba trips at a cost of $332,663. Average per trip: $1,848.13.
Republicans made 94 trips, spending $148,866. Average: $1,583.68.
Private organizations paid the bill, not taxpayers. But, of course, where our lawmakers travel and who pays is public business.
I quickly scanned the list of lawmakers and it looked like Jeff Flake, R-Ariz., was one of the top travelers to Cuba. The LegiStorm records showed that he had gone to Cuba three times. He spent:

Flake didn't limit his travel to Cuba. He made a total of 20 international and domestic trips from March 2001 to August 2008. Cost: $50,811.
The lawmaker's most expensive trips were:

A top sponsor of Cuba travel was the Center for International Policy, based in Washington, D.C. Its Cuba program director is Wayne Smith, former chief U.S. diplomat in Havana. He advocates normalized relations with Cuba.
I did a quick calculation and it looks like the center sponsored 52 Cuba trips costing $81,989.89. 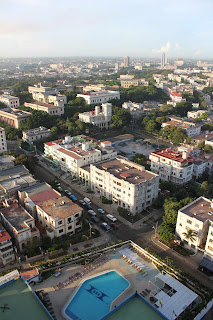 View from the Hotel Habana Libre
Another important sponsor of Cuba travel is the Lexington Institute, based in Arlington, Va. Philip Peters, a former State Department official who writes an insightful blog called The Cuban Triangle, heads the institute's Cuba program.
LegiStorm numbers show that the institute spent $61,454 on 31 Cuba trips. They were divided among 16 Republicans and 15 Democrats.
Finally, there's the Alliance for Responsible Cuba Policy. Its leaders include the Rev. Joan Campbell, former head of the National Council of Churches.
The alliance spent $33,771 on 24 trips, LegiStorm numbers showed. Almost all the travelers - 22 - were Republicans.
These aren't the only groups sponsoring Cuba trips. The LegiStorm site shows others. But I didn't study the site too thoroughly. Nor did I fact-check these numbers or contact the trip sponsors to see if the statistics are accurate and up to date. Still, I think LegiStorm gives a good indication of who's traveling to Cuba and who's footing the bill.
The Web site is a great watchdog tool. You can search by lawmaker, state, destination and more to find out where members of Congress are traveling. You can also download PDFs of the lawmakers' expense reports and look for any irregularities.
That said, I wouldn't want to discourage travel to Cuba. First-hand experiences can help open lawmakers' eyes and perhaps convince them that improved U.S.-Cuba relations is a worthy goal.
Posted by alongthemalecon at 4:48:00 PM