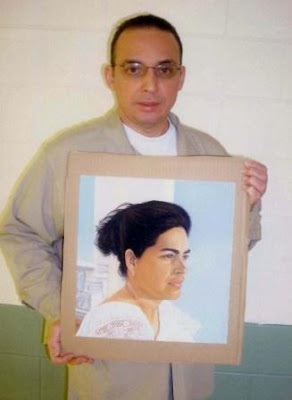 Antonio Guerrero with a painting of his wife, Adriana Perez. A fellow inmate took the photo. 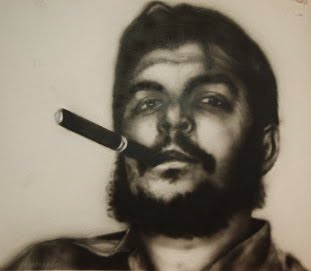 Ernesto "Che" Guevara
Art and poetry have been Antonio Guerrero's escape from a solitary existence. He's one of the Cuban Five.
His art will be on display through the end of October at the Smokebrush Gallery in Colorado Springs. More than 200 people attended the opening reception of his art show on Oct. 2.
His work "includes of cats, birds, nudes, views of Havana Harbor and Colorado mountains, and, in stark contrast, a green metal door. It's a cell door, and it's what Guerrero, a 50-year-old prisoner at the high-security United States Penitentiary in Florence, sees every day," the Colorado Springs Independent says.
The paper quotes Smokebrush director Holly Parker:

They're not images made from boredom or desperation to pass the time. They're not emotionally charged in a negative way. 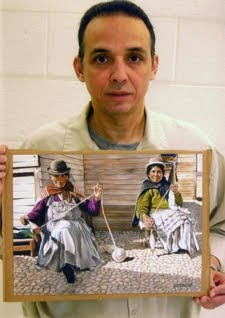 Guerrero has been moved from the Colorado prison to the Federal Detention Center in Miami, pending resentencing. But he did his artwork while at the Florence penitentiary, dubbed the "Alcatraz of the Rockies." The Times of London said:

Built into a mountainside of Florence, Colorado, the Supermax prison is a notorious fortress-like jailhouse for America’s most dangerous criminals.
For Zacarias Moussaoui, the al Qaeda fantasist convicted for his role in the September 11 terrorist attacks, it will be home for the rest of his natural life.
He can look forward to a lifetime of solitary confinement in a facility that houses 399 other high security prisoners including former al Qaeda operatives, drug barons, and ganglords. Set in the middle of the desert and equipped with sophisticated surveillance technology, the prison is considered almost impossible to escape from.
Dubbed by the Guinness World Records as the most secure prison in the world, the 37 acre complex comprises four separate detention facilities, each with a different grade of security. Supermax is equipped with motion detectors, 1,400 steel remote-controlled steel doors, laser beams, barbed wire fences, pressure pads and attack dogs.
The prison opened in 1994 with the aim of incarcerating its inmates in solitary confinement for most of the day and keeping them in extreme conditions. The result is debilitating, say security officials, leading former prisoners to describe it as a living tomb.

No wonder Guerrero paints. His current sentence is 10 years plus life. Resentencing is tentatively set for Oct. 13 before U.S. District Judge Joan Lenard. She's the same judge who sentencing the Cuban Five in 2001. Here's her biography.
Lenard, a native of Amityville, N.Y., is a Clinton nominee. The Miami New Times has criticized the judge, saying her sentencing of the Cuban agents in 2001 was overly harsh. 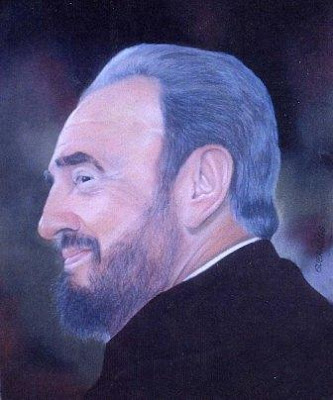 Link:
Along the Malecon's Spy vs. spy page
Posted by alongthemalecon at 6:08:00 AM