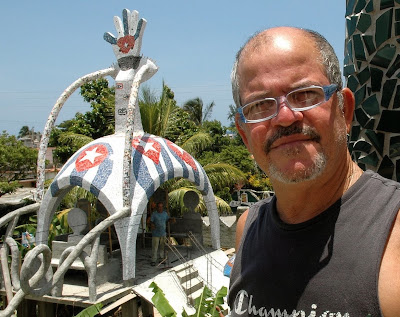 Cuban artist Jose Fuster stands with his tribute to the Cuban Five
Prosecutors are resisting a judge's order requiring U.S. authorities to search for any evidence that three Cuban agents harmed U.S. national security, the Associated Press reports.
Antonio Guerrero, Ramon Labanino and Fernando Gonzalez were convicted in 2001. A Miami judge is scheduled to resentence them on Oct. 13. The AP said:

Federal prosecutors have asked for an emergency stay and appealed a magistrate judge's disclosure order in the so-called Cuban Five case, contending it is far too broad and could produce sensitive material not required in a criminal case. The order requires U.S. officials to search for any national security damage assessments of the Cubans' actions, which could bear on whether three of the five get a more lenient sentence.

I wonder why prosecutors are resisting. Could it be that there are no assessments showing that the Cuban agents harmed national security? Or would these assessments disclose intelligence-gathering methods, hurting future operations?
Link:
Along the Malecon's Spy vs. spy page
Posted by alongthemalecon at 4:28:00 PM