Fidel Castro: "I used to be a politician" 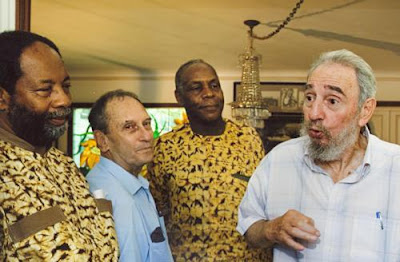 Saul Landau, who made "Fidel" and some 40 other films, met with Fidel Castro recently and wrote about his encounter with the former Cuban president. He said Castro was surrounded by grandchildren and other family members and seemed to be enjoying retirement. He quoted him as saying:

I immerse myself in reading and I write as well. I’ve read Obama’s books very carefully.

Castro then flipped through Obama's “Dreams From My Father,” which had hand-written notes on almost every page. Castro described Obama as:

A man who shows deep intelligence, with a gift for writing, and obviously good values. But he is limited in what he can do. He is tied down by vested interests.

Castro said he knew what Obama must be going through:

I used to be a politician. I can put myself in his shoes. I understand how hard it is to make basic changes. 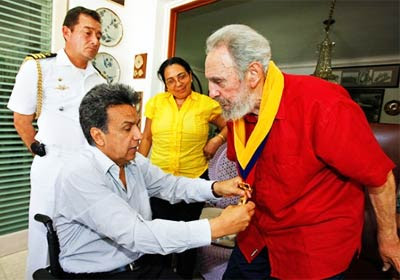 This is the latest photo of Fidel Castro. Photo credit: CubaSi.

Link:
Along the Malecon's Fidel Castro page
Posted by alongthemalecon at 6:36:00 PM