Forget that Apple computer. Get a Mango. 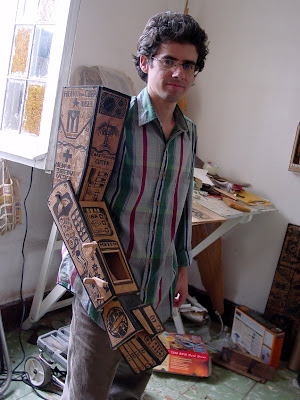 Almost a decade ago, Artist Abel Barroso created Cuba's Internet cafe, filling a popular restaurant with computers, laptops and cash registers made of wood, paper and cardboard.
His brand: Mango Tech.
Barroso's work makes fun of "consumerism and wealth," according to Natania Remba, who has written about and studied the impact of globalization on Cuban art.
And Mango Tech is a "south-of-the-border reference to the Apple corporation," she writes in a paper called "Globalization in the Contemporary Cuban Art World."
Remba quotes Barroso as saying:

I was born twelve years after the revolution, and I don’t know, practically, what is a TV commercial. Suddenly, I see myself expressing new words: WSP, Benetton, Mitsubishi Motors, Hyundai…. 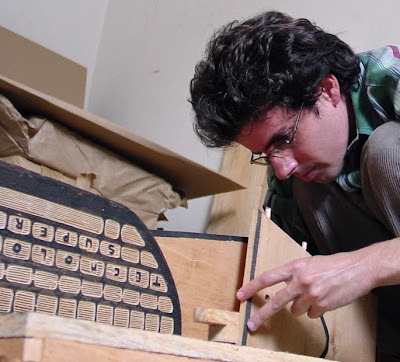 A cheap repair
I spoke to Barroso in 2002 for a story published in the Dallas Morning News. He agreed that the island's isolation fueled some artists' creativity. He said: 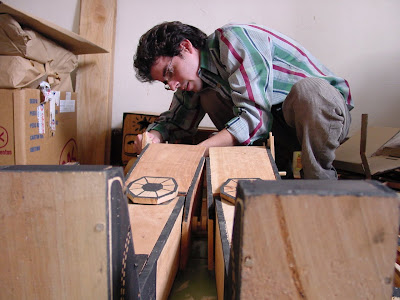 The contrast between Cuba and the developed world also gives Barroso plenty of material for his work.
He said he got the idea for his Third World cafe after traveling to Los Angeles for an exhibit and seeing all the Internet cafes. He said he wanted to highlight that Cuba was way behind other nations when it comes to the Internet. And he wanted to draw attention to Cuban artists. He said:

What we want is international recognition. We want to show our work at more and more exhibits. We want to be seen and heard. 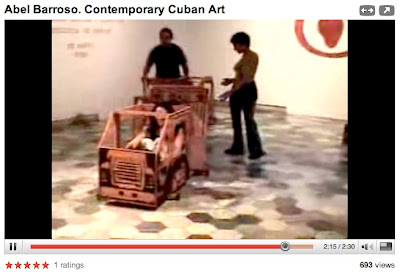 Abel Barroso's cardboard cars and buses on YouTube
Links:
Along the Malecon's Art & photography page
Posted by alongthemalecon at 5:39:00 PM